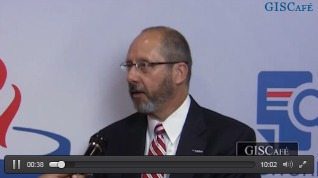 At GEOINT 2015 Rob Zitz sat down with GISCafé for a video interview discussing Leidos’ role in U.S. geospatial intelligence and how the company will affect the future of the industry. In such a data-reliant field, Leidos is considered to be experts in data collection and management in both the national security and healthcare sectors.

Leidos is following the request of NGA’s Director Robert Cardillo by creating systems that “open the aperture” of geo-spatial intelligence gathering. According to Zitz, by giving complete access to the open source web data, the company’s analysts are given the ability to compare and contrast multiple data sources while being able to track the path of a specific data set. Zitz also goes on to explain that Leidos is developing an automated system able to search the internet for specific data without bogging the analyst down with unwanted information. These systems includes automatic target algorithms that compresses the amount of data collected to a level that an analyst can easily manage, tracks all real and potential changes in the data, and organizes them into a singular accessible format.

This is the “Secret Sauce” in Leidos’ data strategy: change detection. By adding multiple mediums of data, such as audio, visual and textual, into one singular system, an analyst can easily work with large portions of specialized data on his or her preferred platform. As the data becomes integrated, Leidos is able to track when a change will be made. Going further, Zitz explains how Leidos is using this system in its “GLIMPS” program which can predict a future instability up to 5 years in advance. Leidos is also working on a Cyber specific system of change detection that targets where the next cyber attacks will occur.

Leidos’ GEOINT strategy is looking beyond gathering data, it learning to implement that in a system that can automatically determine where and when the next problem will occur. If done right, the analysts will be able to come up with a solution before the issue even arises.

To watch the interview in its entirety, click here.