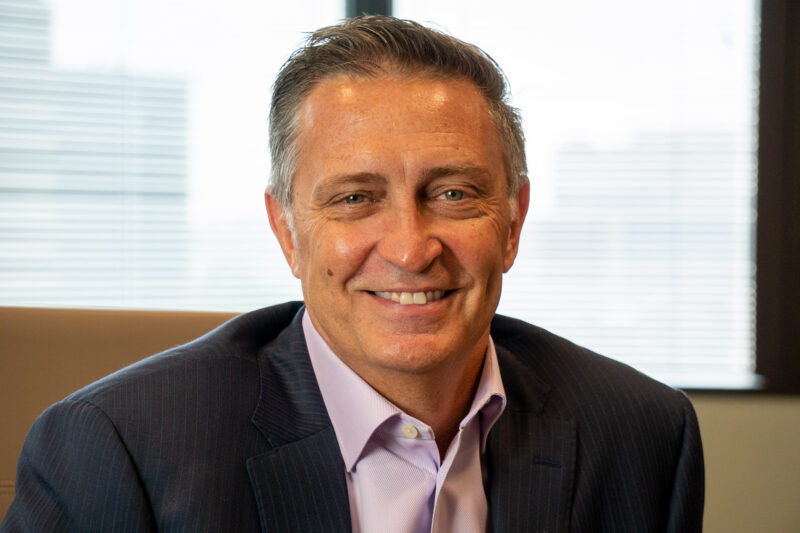 In college, Mark Gray aspired to be a U.S. Navy pilot, but life and career took a different path — one that uniquely prepared him for a leadership career rooted in civil service and built on sincerity.

“I always wanted to get into aviation,” said Gray, who serves as the president and CEO of ASRC Federal, where he’s focuses on expanding customer engagement, growing the business and market diversification. “Back then, you didn’t get waivers granted for eyesight. I had bad eyesight from the time I was 16, so I had to decide to do something different, because I couldn’t fly airplanes.”

So, rather than flying airplanes, the Little Rock, Arkansas, native learned how they worked. He got his bachelor’s degree in aerospace engineering from the University of Notre Dame in 1984 and went to work for the Naval Air Test Center at the Naval Air Station Patuxent River in Maryland as a flight test engineer.

“To me, it was the next best thing to flying Navy jets,” Gray said. “And that was the beginning.”

Because of this job, Gray was selected to attend the U.S. Naval Test Pilot School as a civilian 1989-1990. It was there he learned an important concept Gray would use later in his career: mission relation. It’s the idea that everything done for customer must relate back to their ultimate mission and most important needs.

That concept, coupled with the analytical framework from his engineering degree, proved to be instrumental in how Gray interacts and engages with government customers today.

Gray spent 12 years as a civil servant. He moved up from engineering to project management to program management. After years of service in the public sector, Gray decided it was time for a change, and a new challenging opportunity in the private sector came along just at the right time.

In 1997, he joined Information Spectrum, a small government consulting company acquired by Anteon Corp. in 2003. He spent nine years there, earning promotions that allowed him to run larger business operations as the company grew.

It was during this part of his career when Gray also scratched the finance itch he’d had since undergrad, earning his MBA from Georgetown University’s McDonough School of Business in 2003.

From there, Gray continued his industry career. He joined INDUS Corp. in 2006 as chief operating officer, URS Corp. in 2008 as vice president and general manager and then ASRC Federal in 2014.

What Drives a Leader

Gray learned to lead from his mentors in government, and he learned what not to do from observing others. But what motivates him as a leader is pretty straightforward.

“I like to win, hate to lose. That’s never going to change,” he said.

Gray said he’s been this way since he was young, but it’s only now that he connects the desire to win to the other driving factors in his career: meeting commitments and surrounding himself with a team of people who he can depend on.

“When you have a great team member who you trust, has delivered results, embraces the organization’s overall mission and is fully committed, that team member is like a fire-and-forget weapon. You don’t have to worry about that person and what he or she has committed to do,” he said when describing his team.

And ultimately, it’s about delivering results.

“We have a very unique opportunity to set our own course to a large extent, and the least that we should expect out of ourselves is to make sure we deliver what we say we’re going to do,” Gray said.

As a leader who likes to win and create a genuine, employee-centric culture, Gray believes in balance. He emphasizes there doesn’t need to be a disconnect between balance and success.

“A lot of very successful executives say, and often use the excuse that, ‘I’m all in on success professionally,’ and they forego whatever balance is to them,” Gray said. “There doesn’t need to be such an opposition or a binary choice. I try to live this truth and I really encourage our team to do it as well: you can be successful and feel balanced–whatever that balance means to you personally — but they’re not mutually exclusive.”

For ASRC Federal as an organization, a part of that balance is its involvement with several organizations, including the American Heart Association, Special Olympics Maryland, Boulder Crest and American Corporate Partners.

ASRC Federal works with ACP to provide mentorship for retiring military veterans transitioning to industry. It’s impactful to those who have dedicated their lives to serving, and it’s an organization that resonated with ASRC Federal employees.

And while there are countless great causes dedicated to illnesses, AHA was one Gray felt especially passionate about. Putting strategy and success aside, a good friend once told Gray that, “the most impactful thing you do can do is rally your organization around a cause that’s meaningful to each and every employee.”

But having a bit of fun doesn’t hurt either — something Gray also learned to value at the Naval Test Pilot School. In fact, he jokes about 1989 being the pinnacle of his career.

“I had a bunch of great men and women around me and I got to fly a lot. So, I joke around and say, ‘hey, my career peaked then because I had a lot of fun flying, learning and doing so with great people.”

GovCon is a serious business with high expectations. And because Gray is a “pretty intense person” most of the time, he tries to balance it out by being lighthearted and having fun.

“If you don’t do that, it’s not sustainable,” he said.

Being a CEO is a big job, and Gray has a few specific priority areas as 2020 approaches. First, he’s focused on the refinement of ASRC Federal’s market diversity and following the robustness of funding in the federal space – civilian, defense and intel.

Second, Gray is honed in on personal customer engagement. As he reflected over the last 12 months, he realized he’d like to be even more engaged with customers — both existing and new. So, he has made the commitment to engage while also working on raising the sales bar.

And lastly, there’s an organizational focus on a handful of core capabilities the firm brings to market.

At the top of that list is software development, artificial intelligence and machine learning. ASRC Federal is currently applying its AI/ML capabilities for space missions to improve satellite sensor system performance by decreasing anomaly detection time. The same technology is used for financial back-office systems to uncover unused funds by extracting data onto a secure cloud and running algorithms.

Gray said he’s committed to meeting certain goals he outlined before the board and to building a team to support those goals by the end of 2023 — as the company tends to operate in 5-year segments. These goals keep Gray motivated and surrounded by great people.

In fact, one of the most rewarding aspects of his current position is that he has been entrusted to build a team and strategy, execute it and deliver impactful results for a unique group of shareholders, employees and customers.

“It’s that trust and empowerment to build and run a company, to be genuine along the way, and to do it the way I want to do it,” Gray said.

But outside of work, Gray’s life enjoyments are rather simple. He’s a sports junkie who likes the beach and being on his boat. He likes good wine and country music. Plus, working out keeps him at his best as he’s being trusted and empowered to run a company.

“It fuels me with the energy and passion I need to take on my life,” Gray said.