For some students at Thomas Jefferson High School for Science and Technology, the pressure to succeed can be intense, and leaders are working to dispel some of the misconceptions around the school.

“Once you get into TJ, it’s a high school just like any other high school,” said Principal Dr. Ann Bonitatibus, who spoke on a panel with student Anna Lulushi at WashingtonExec’s 2018 K-12 STEM Symposium on April 14. “There’s a range of performances there. There are good days and bad days.”

Bonitatibus was addressing an image of perfection she said some students have in relation to what they should be like or what other students are like at TJ. Nearly 3,200 students applied to get into the school this year, but only 485 were accepted.

TJ is consistently ranked among the nation’s top schools, but admissions are based not only on test scores but on a student’s overall passion, well-roundedness and other nonacademic work, she said.

Is being a student at TJ stressful?

“I think TJ is as stressful as you want it to be,” Lulushi said.

Students who elect challenging classes and a heavy load of extracurriculars may find themselves more stressed, but the trick is also in one’s attitude about the situation, Lulushi said. Also, while the school is “competitive” to get into, students there often have strong bonds among themselves and work hard to lift each other up, she said.

The problems that come with striving for perfection aren’t unique to TJ, Bonitatibus added. Still, leaders there are working to support students in taking risks and pursuing deep learning into areas about which they’re passionate.

“Not everybody who graduates from TJ is necessarily in a traditional STEM career,” said Bonitatibus, who herself has a varied background that includes training in computer science, bus driving, administration, teaching and other fields.

She spoke of a female student who felt isolated because her passion was music. The student was using mathematics and technology principles to develop a tool to assist in developing rhythms. Another student in a social studies class was working on a computer statistical model related to elections.

“One thing I’ve learned is there’s really no right or wrong way to be a TJ student,” Lulushi said. “There are so many different paths that you can take.” 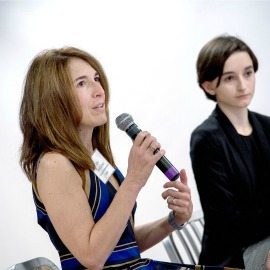 “Anna’s that perfect example of that well-rounded student who has so many different interests beyond the traditional lab coat or sitting in front of the computer,” Bonitatibus said.

Lulushi encouraged students to take advantage of the opportunities they have now to try new things in a low-risk environment.

The two women agreed a “perfect day” at the school would be one in which no one talked about GPA, test scores or which college they wanted to get into and instead focused on the actual learning.

TJ has also been accepted to Challenge Success, a Stanford University program for middle schools and high schools that is aimed at reforms to support students’ well-being and increase motivation and learning.