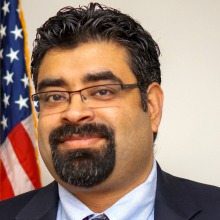 Ingenicomm, Inc. CEO and President Amit Puri is a finalist for Ernst & Young’s 2017 Entrepreneur Of The Year Award in the Mid-Atlantic region, according to an Ingenicomm announcement.

The Entrepreneur Of The Year program, which is in its 31st year, “recognizes entrepreneurs who demonstrate excellence and extraordinary success in innovation, financial performance, and personal commitment to their businesses and communities, and who inspire others with their vision, leadership and achievement,” according to the announcement.

“I am deeply honored by the judges’ decision,” Puri said. “This award is a reflection not only on my own work as an entrepreneur, but also on the incredible dedication and passion of everyone here at Ingenicomm. I could not have succeeded without the support of the entire Ingenicomm family, and I am grateful for their trust in my leadership and for their commitment to our collective mission.”

The Entrepreneur Of The Year awards includes regional, national and global awards programs in over 145 cities and more than 60 countries. Past honorees of the program have disrupted industries, created new product categories and successfully brought new innovation and technology to traditional industries, according to the announcement. Previous winners include Starbucks’ Howard Schultz, Whole Foods’ John Mackey, eBay’s Pierre Omidyar and LinkedIn’s Reid Hoffman and Jeff Weiner.