You are at:Home»Execs to Know»For GDIT CIO Kristie Grinnell, IT Transformation Begins With Organizational Buy-In 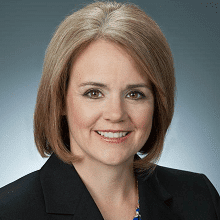 How do you drive IT transformation at one of the world’s leading IT systems integrators?

If you’re Kristie Grinnell, who serves as CIO and vice president of information technology at General Dynamics Information Technology, you start with a coin.

“In one of my first meetings, I brought my leadership team together, and gave each of them a $1 gold coin,” recalls Grinnell. “I’ve asked them to carry that coin with them ever since.”

The rationale, she adds, is simple: Change is uncomfortable for people. So what better way to address the need for change than with … change?

“I wanted to constantly remind my team that this special coin – something you don’t see every day – is an opportunity for them to be part of transformational change, in driving value across our organization,” says Grinnell.

Creating organizational buy-in, from the top down, has been Grinnell’s focus since she arrived at GDIT in December 2015.

Both in her current role, and in previous executive positions at PricewaterhouseCoopers and CSC, where she led two major global IT transformations, Grinnell has maintained a central belief: IT should be less a commodity service and more of a true business partner – one that ensures precious IT dollars are spent on the right IT, at the right time, to maximize lasting business value.

Get the latest industry and executive news in the WashingtonExec Newsletter

Even before she officially joined GDIT, Grinnell was thinking of how she could foster true IT transformation within the halls of the Fairfax, Va.-based IT services company. It didn’t take long to find the answer.

Shortly after her arrival, Grinnell convened the very first IT governing body meeting.

“The support of our senior leadership was critical,” says Grinnell. “You really can’t look at many topics on the business agenda that don’t involve IT, so it needs to start at the highest level.”

“That’s the very first step in any IT transformation,” adds Grinnell. “You’ve got to get that body of individuals together – aligned and moving in the right direction, supporting what you’re doing.”

At the same time, Grinnell was cognizant of avoiding a common CIO mistake: moving too fast. “Being patient and allowing for time to educate and drive change – not just in IT, but within the business functions as well – is really key,” says Grinnell. “You can’t be too far ahead of where the business is trying to go – you need to bring the entire organization along with you,” she says.

Bringing the entire organization along, adds Grinnell, couldn’t have happened without empowering each team member. “Just telling people what to do doesn’t make change happen,” she says. “People have to feel it in their bones, in what they do every day.”

True to form, that governing body – the IT Portfolio Management Group – has been a step in that direction.

Clear communication, on an ongoing basis, underpins those efforts. Working closely with GDIT’s marketing and communications department, Grinnell ensures weekly messages – brief, with two to three bulleted items – are sent out to each governing group. Throughout, feedback is encouraged.

Fostering a competitive group culture comes naturally to Grinnell, who once played on a women’s ice hockey league while pursuing an MBA at Cornell University. Grinnell also credits her father, a former entrepreneur in the telecommunications industry, with instilling the belief she could be anything.

“I was very fortunate to be raised by a father who very much came from the mindset, ‘I’m not going to raise my daughter to marry an executive but to be one herself,’” recalls Grinnell, today a mother of three, two of them girls.

That determination guides Grinnell’s personal pursuits, including, notably, as a Girl Scout Leader, youth leader in her church, and professionally in her role as CIO of GDIT — where, if Grinnell has her way, change may just keep on coming naturally.