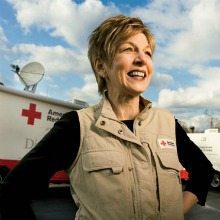 The American Red Cross in the National Capital Region will host the 2016 Salute to Service Gala from 6 to 8 p.m. Nov. 19 at the Hilton McLean in Tysons. This year’s event is in recognition of the 75th anniversary of the U.S. entry into WWII.

More than 600 people have already registered to attend. Norm Augustine will be honored with the Lifetime of Service Award. He is the retired Chairman and CEO of Lockheed Martin, served as a member of the President’s Council of Advisors on Science and Technology under Presidents Clinton and George W. Bush and served as chairman and principal officer of the American Red Cross for nine years.

The annual black-tie tribute is the largest fundraising event of the year. Funds raised are transformed into services delivered every day. Hundreds of military, government, corporate and community leaders will gather for an inspirational evening that supports area programs.

Red Cross volunteers provide critical services on bases and in military hospitals around the world, and in support of military families during deployments and emergencies.