You are at:Home»Execs to Know»Zalenda Cyrille of Vencore and Recipient of INSA’s 2016 Achievement Award Promotes Mentorship and STEM for Girls 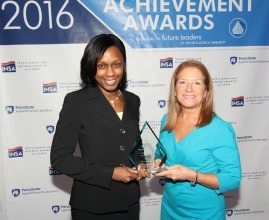 On February 9th Zalenda Cyrille, Senior Program Manager at Vencore, received the 2016 Edwin H. Land Industry Award from the Intelligence and National Security Alliance (INSA) for her contributions to the intelligence and national security communities in the private sector. At Vencore, Cyrille manages over 30 engineers and a multimillion-dollar contract portfolio. She also adapts, teaches, and implements industry best practices for software development across the Intelligence Community (IC). A mathematician, systems engineer, and longtime mentor discusses how mentors helped shape her career.

WashingtonExec:  How has your role at Vencore changed through the years?

Zalenda Cyrille:  I joined Vencore (formerly the SI Organization) 15 years ago. About three years ago, Vencore gave me an opportunity to get training in Agile and allowed me to become more of a consultant for the company. In that capacity, I worked with many different agencies across our portfolio to help them with their Agile development projects.

I like the fact that my company was willing to take a chance on me and expose me to many different kinds of opportunities beyond my day-to-day job. As a result, I developed new skills and conducted process improvement activities at the enterprise level—something I enjoy doing.

WashingtonExec:  What is it about Vencore that has caused you to want to stay with the organization as it transitioned from Lockheed Martin to the SI Organization and now Vencore?

Zalenda Cyrille:  Because Vencore offers the flexibility and opportunity be entrepreneurial. It has that creative and exciting “small company” mentality. The leadership team encourages employees to try different things and learn new things. So you get opportunities to chart your own course. I think another thing that sets us apart is that our leadership is so accessible.

So there was no one really doing Agile in the areas I was in so I said, “Hey, why don’t I get a certification?” and they allowed me to do that, which led to other activities, such as consulting on a NASA program at the Kennedy Space Center! Just being down there was so exciting! I saw the space shuttles up close and I couldn’t believe it. We were creating the launch software for the next manned flight. That was totally different from anything I had worked on in the past.

WashingtonExec:  Did you always want to work in the Intelligence Community?

Zalenda Cyrille:  No. In fact, I didn’t know much about the Intelligence Community until college. When I went to Carnegie Mellon University, we had big Tech Fairs and the National Security Agency was at a Tech Fair. They said they hired the most mathematicians. Since I was pursuing a degree in math, I thought I should work there. So I interned there my junior year. Then after that, having NSA experience on my resume opened a lot of doors.

WashingtonExec:  Why is mentorship important to you? What mentorship programs are you formally or informally involved in?

Zalenda Cyrille:  I’ve done both—I’ve been a mentor and I’ve had great mentors. I’ve definitely had some really great mentors. One of my early mentors is someone I still meet with even though we are now at different companies. Additionally, I was lucky to find several women in leadership roles who were wonderful mentors.

When I look back, one of the great mentors I had was Jeff Drexler, the Vice President who initially nominated me for this award within Vencore. When I first got to know Jeff, he was just a program manager and I said “Hey, I’m interested in program management, would you be my mentor?” I was his first mentee and we had a great relationship. With his help, I became a capture manager and I tried a whole bunch of different things.

In terms of serving as a mentor I have done a few different things. At Vencore, we have three different mentoring groups and I am the one who organizes all three—for junior, mid-career, and senior level employees. I am the advocate mentor for the mid-career group. We have regular roundtable sessions where we talk about things like coaching, leadership, dealing with difficult people, interviewing, and all of the different things people need to learn to become great leaders. I developed the curriculum to share all of the training and coaching I have received from my mentors through the years.

In addition, in 2009 I started a non-profit in Washington, D.C. called IT’S TIME, for 5th and 6th graders, teaching them about public speaking, career opportunities, and financial literacy.[1] I met with the students every Saturday for ten weeks throughout the year—teaching and mentoring them.

I’ve also participated in roundtables on mentoring and STEM education activities. I think STEM is a tough field, especially for women and people of color. If I can be a good role model, and others can see themselves working at places like NASA in the future, near all of the wonderful rockets, then it is a success.

WashingtonExec:  WashingtonExec hosts an annual K-12 STEM Symposium, this year on March 12, 2016. One of the topics each year is the importance of helping girls pursue their interests in STEM. Industry leaders have said that girls who have a mentor are more likely to stay in STEM. What should I be asking you about STEM that I haven’t asked yet?

Zalenda Cyrille:  I definitely think girls should have mentors. Most of my career mentors were women. I sought the advice of more experienced women because there were not many women in defense contracting. I wanted somebody who could relate to the fact that being a woman in these fields is a tough thing and guide me to find opportunities and overcome challenges.

I also served on the Leadership Team of another organization, the Mid-Atlantic Girls Collaborative—or MAGiC. MAGiC connects and supports organizations across the area that are committed to increasing the number of young women pursuing STEM. The idea is to connect STEM programs, create synergy, and share resources.

Over the years, one of the things I learned is that you have to catch young girls early, when they first become interested. After maybe 4th or 5th grade, girls are more likely to lose interest in pursuing STEM even though they had great potential as little kids. So having a mentor is vital to keeping them motivated.

At my university, Carnegie Mellon, there is a computer science program called ALICE, which helps young people develop their own adventure, based game on their favorite stories and fairy tales. When I started at Carnegie Mellon there were two women in the computer science program and only two females in my math class. By the time I graduated, 50% of the incoming class was computer science majors, thanks to the University’s investments in programs like ALICE and other STEM programs for young girls. I believe we have to start showing girls the options and opportunities early on and that you can be cool studying STEM.

That’s why I love campaigns like #ilooklikeanengineer.  It shows you don’t have to worry if you look nerdy or not. If you enjoy it, you enjoy it.

[1] Ms. Cyrille was co-founder and board member of IT’S TIME, which stands for Inspiring Thoughtful Students by Taking Initiative to Motivate Excellence.