MacAulay-Brown, Inc. (MacB) today announced that it recently sponsored Spookstock 2014, a musical festival and competition that raises money for the families of fallen Special Operations Forces (SOF) soldiers and CIA officers, and that the MacB Band took first place in the Spookstock 2014 Battle of the Bands competition.

Spookstock was held on October 30th at the headquarters of JK Moving Services in Sterling, Va., and featured live music from Grammy-winning guitarist, Peter Frampton, who performed with Jeff “Skunk” Baxter, the guitarist from Steely Dan and The Doobie Brothers. Three custom guitars were also auctioned off, which were autographed by Master of Ceremonies Harvey Keitel, Frampton, Baxter, Robert DeNiro and Admiral (Ret.) Bill McRaven, former commander of the United States Special Operations Command (USSOCOM). 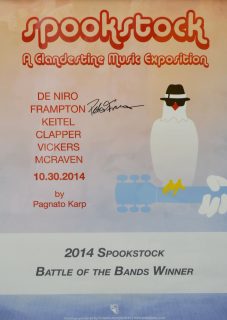 The event also featured the Spookstock 2014 Battle of the Bands, a live competition between eight amateur bands comprised of musicians from the National Security community. Robert DeNiro, Adm. McRaven and music industry icon, Peter Gray served as judges for the competition.

The Operators, a MacB band led by MacB President and CEO and lead guitarist, Sid Fuchs, took first prize. Other members of the band included MacB employees Greg Yadzinski (rhythm guitar), Chris Laux (bass), Jason Cooper (drums) and Chris Blackburn (vocals and harmonica). Jacqui Pierce and Sunni Trippel joined The Operators on vocals, and the band entertained the crowd of more than 500 with their rendition of the Rolling Stones’ “Gimme Shelter.”

“It was an honor to coordinate and host Spookstock 2014, which raised over $690,000 for the families of our SOF warriors and CIA officers,” said Spookstock Executive Director Pack Fancher. “The Spookstock Foundation, congratulates The Operators and we thank the judges, participants, sponsors and attendees for making this a Spookstock to remember.”

“Giving back to the community is one of our highest priorities at MacB,” said Fuchs. “We were honored to win this year’s Battle of the Bands, but just being part of such a milestone event and to see the entire community come together to support and provide for those who have given so much made it a night to remember. We look forward to continuing our commitment to the community at every chance possible.”

Watch The Operators’ set on YouTube here and listen to the Spookstock judges’ comments here.