The Paul Smith Tale: How a Father And Son Pair Are Taking on The Beltway

PJ Smith III might not yet be able to trounce his dad in a 10K run, but he’s keeping up with dad, Paul Smith II, in other ways.

The Villanova University graduate is an inside sales representative at Splunk, where he’s leveraging the industry information he absorbed from his dad while growing up and through his previous work experience at CBRE in order to make it in the government contracting biz.

The San Francisco-based organization monitors and analyzes machine data — the subset of unstructured data generated by machines – for agencies around the beltway and competes for work in the bustling Tysons Corner area government contracting industry.

“I‘ve always wanted to be in client facing positions. I like problem solving and helping people solve problems,” PJ told WashingtonExec in a recent interview. “For me this industry is dynamic, it’s fast paced, always changing and filled with people that want to help their customers really get the best ROI they can.”

Father Paul Smith touts more than 20 years in the same federal IT space and worked with most of the notables in the industry before taking on his role in 2005 as vice president, general manager of Red Hat Public Sector – a global open-source software company. Before Red Hat Paul was at VERITAS.

“My background at Unisys and Oracle included a number of sales and sales management roles in almost every type of government customer…By the time VERITAS was serious about starting a stand-alone Federal practice in the year 2000, I had checked most of the boxes,” Paul told us, noting that the public sector portion of VERITAS enjoyed accelerated growth in the 5 years until 2005.

That year, Red Hat was also interested in starting a public sector practice and Paul was recruited to get that started. It’s been one of the fastest growing divisions within Red Hat during the past 10 years.

“Timing is a good thing.  I have been with Red Hat since then and we have seen an industry transform.  OpenSource technologies and OpenSource development methodologies are accepted today as COTS: safe, secure and performant,” Paul said. “I’d like to think that Red Hat led the way to making that possible.”

That’s not to say the father-son duo was always on track to work in the same industry.

Though Paul always knew his son related well with people, he said he always imagined his son would grow to be an architect.

“PJ was a fun kid growing up.  He’s very goal oriented and at a very young age he kept a detailed manual on things he would like to invent or build.  He called it his ‘Ideas Book,’” Paul said. “It was chock full of drawings ranging from house designs to furniture to other little inventions for around the house.”

PJ chimes in with the complete picture and lets out that while he always admired the way his dad could communicate with people, he did not initially see himself moving into the same industry.

“After graduating from Villanova I moved to NYC so that he couldn’t talk me into joining the industry,” PJ said.

But that soon became harder and harder to avoid.

As he read, his impression about the industry transformed.

“It went from ‘hey these big data companies might want to look at Northern Virginia for office space’ to ‘hey if this is really as good as it sounds maybe I should be working in that industry,’” PJ said.

PJ interned at DLT Solutions and Red Hat, Singapore, and pursued a stint in commercial real estate before moving to Splunk and the DC beltway-scene.

Paul suspects the cadence of the public company reporting system was ingrained in his son early on.

“PJ once remarked to his mother about a new bike when he was in middle school: ‘I can’t ask dad about that now, it is 4th quarter,’” Paul said.

“Red Hat and Splunk actually have some really cool reference architectures developing around  Splunk applications running on Red Hat Storage with Cisco.  So there may be some chances to actually work on some deals together going forward,” Paul said.

Does son PJ ever feel eclipsed by the familial ties or his father’s role in the industry? Not necessarily.

“I feel very fortunate to work for some great people at Splunk, many of whom my Dad has also had the pleasure of working with back in his VERITAS days.  It is great to have that type of relationship come full circle,” PJ said.  “Being “Paul Smith’s son” has not been brought up too often though it has come up a few times on calls or I’ll recognize a name from old Christmas parties.”

Paul agrees that the beltway is small, but expresses his gratitude for the somewhat ubiquity of the Smith surname.

“The nice thing about the last name Smith is that it may take people a while to actually connect those dots, so PJ can enjoy some anonymity while he is building his career on his own terms,” Paul said.

PJ, who hopes to be working for himself in the “short” 15 years that separate him from his 40s, credits his dad for much of what he’s learned and the opportunities he was able to take advantage of growing up.

“I am proud of what my dad has accomplished – – growing up he didn’t have nearly the advantages he has provided to his children, and he has built a career based on listening to his people, long hours — if you spend enough time with him he will reference Malcolm Gladwell’s 10,000 hours rule from Outliers — and integrity,” PJ said. “I am constantly humbled by the reputation that he amassed for himself both in the industry and amongst his friends.  I couldn’t ask for a better moniker to build upon, but I plan on creating my own name for myself as PJ Smith.”

PJ said the duo often encourage each other to remember actor Will Smith’s  — no relation —  keys to life:  “read a lot and run a lot — and that persistence is the key to success.”

“It is all about not quitting when things get tough, persevering and the person that works the hardest wins,” PJ said. “Although I can’t quite take him in a 10k, I am catching up.” 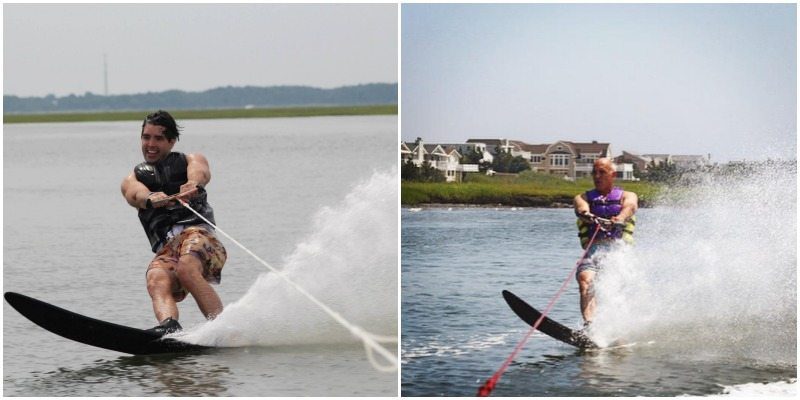