You are at:Home»Execs to Know»Government Contracting: A Family Business for the Curling Clan 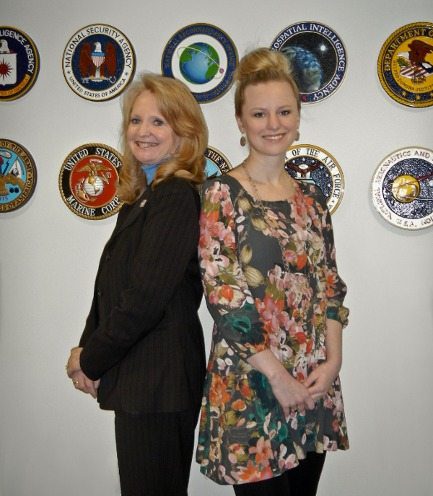 If Hollywood show-business has the Goldie Hawn and Kate Hudson mother-daughter act, then DC’s government contracting community has Kay Curling and Melissa Curling.

Often times, we find that those executives who frequent the black-tie circuit influenced their children to join the government contracting “business.”

But who are these “second generation” young professionals and what makes them want to follow their parents into the industry?

Kay Curling, Senior Vice President & Chief Human Resources Officer at Salient Federal Solutions, Inc., and her daughter Melissa Curling, an Operations Manager at KippsDeSanto & Co, took a few minutes to discuss with us their relationship, why they chose the industry, and if it ever affects conversation around the family dinner table.

Kay, who lived in Germany for ten years and served as Department of Army Civilian for six years, started her 20-year career with SRA International thanks to the nudging of her husband.

“When I returned to the U.S. [from Germany], my husband was working as a subcontractor for SRA International,” Kay said. “He heard about an opening in their HR Department and within three days of that call, I was hired.”

“Three of my teams were honored with CEO Awards,” Kay Curling said. “Watching my teams come together and provide significant value to their respective organization is a source of great fulfillment for me!”

Melissa’s professional start was a bit different: immediately after graduating from East Carolina University (ECU) she came back to her old dance studio by teaching dance classes. Growing up, Melissa said her dream was to be a Rockette “and dance on the Radio City Music Hall stage every night.” But she realized she wanted a job with more “normal hours and less 3 – 5 year olds in tap shoes.”

Melissa started at KippsDeSanto, an investment bank with specialization in mergers and acquisitions (M&A), in January 2008 as the Executive Assistant (EA) to the Managing Director (CEO) and the Director, just a couple of months after the company’s inception in May 2007. She has spent the last five years building the administrative team and managing overall operations, and was promoted to her current role as Operations Manager in January 2012. She likes to think of herself as the company’s “MAC of all trades” in that she oversees and manages all company vendors.

But is Melissa surprised that her desire for a more 9 a.m. to 5 p.m. workday would bring her into the same field as her mother? She says not so much.

“I wasn’t a child who thought much about my career as an adult,” she said. “I never dreamed of being a veterinarian, pediatrician, or teacher. I lived in the moment as a child, and still very much do. I’m not shocked that I followed my mom’s career-driven footsteps as we are very similar in every way.”

“Melissa was a social butterfly who derived her energy from being with groups of friends,” Kay said. “While I never thought about her entering government contracting or HR, it was clear to me that Melissa had strong administrative and leadership skills.  She was a very strong-willed child who was determined to accomplish whatever she set her mind to.”

That determination includes setting up her own dance studio, District Dance Co., in Germantown, Md. that specializes in ballet, tap, and jazz dance for children ages 2 to 18. And she credits KippsDeSanto for making it flexible and encouraging enough for her to follow her dreams.

“The studio gives me my creative outlet while still allowing me to utilize the amazing business skills I’ve learned through my years at KippsDeSanto,” Melissa said. “I couldn’t imagine two more different worlds, but both make me very happy for different reasons and both are equally important in my career goals.”

“The industry has such a variety of options. Young professionals can follow their dreams of being an engineer, accountant, or web developer while working for a government contractor. They can grow in these specific fields or find another career path all within the industry. That’s the beauty of it all.”

Melissa credits her parents, above anyone else (including Oprah and Martha Graham) for giving her the most impact and influence growing up. Though she calls them “polar opposites,” she says they were always a “team,” raising her and her siblings to do what made them happy.

“My parents represent everything positive in my life,” Melissa said. “My mom is strong, focused, and determined. My dad is quiet, humble, and intelligent. They allowed me to [respectfully]question everything and everyone. Because of their amazing example, I was never afraid to take the next step in my career and in life.”

Does her Mom see the two of them working together? According to Kay, that may happen if she ever enters politics.

“My mother always thought that I should go into politics,” Kay said. “If I did, I would want Melissa to run my campaign and be my Chief of Staff.  It would be a fun ride! Melissa pushes me outside of my comfort zone to think about things differently.  I love that about our relationship.”

Be sure to read our recent story on the kick-off event for the Strategic Human Capital and Critical- Talent Council, which is co-chaired by Kay Curling. And check back with WashingtonExec for profiles of families in government contracting over the next couple of weeks.

WashingtonExec, in addition to profiling Mobilegov’s Tom Suder, has also profiled other families in government contracting, like Dale Luddeke & Lindsey Littman, the Alderson family, and the Downers. Keep checking back for future featured families in the industry.