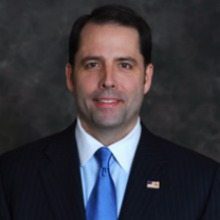 WashingtonExec caught up with Chad Sweet, co-founder and chief executive officer of The Chertoff Group to discuss a variety of topics, including The Chertoff’s five year anniversary, his M&A Outlook and retaining the firm’s top talent pipeline.

Sweet also gave detailed advice to those planning to retire from federal service and enter the private sector; including the do’s, don’ts and where individuals of this background are most marketable.

“It’s the old saying, ‘Success breeds success.’ The stronger talent we can get on our bench, the more people will want to come and play here. In baseball, you want to play for the Yankees but can’t always achieve that. We want to be the Yankees of our space. We want to be a place where people who are the best and brightest want to be affiliated.”

Sweet and Michael Chertoff co-founded The Chertoff Group in 2009 — a global advisory firm with commercial and federal clients in the national security space. The group is headquartered in Washington, D.C. and has offices in Washington, D.C., San Francisco, Calif., New York, N.Y.; and London, England. Prior to the business move, the two worked with one another at the U.S. Department of Homeland Security, where Chertoff was Secretary and Sweet served as Chief of Staff.

“Looking back over what was the worst recession since the Great Depression, we are really proud of the team that we were able to assemble, which includes more than 50 dedicated professionals in the firm,” said Sweet. “We’ve got about 25 senior advisers, nine advisory board members and four offices around the world, with a fifth office opening this year. Despite all of the headwinds both globally as well as here in Washington, D.C., it’s been very satisfying to see the market respond so well to our value proposition.”

Sweet worked as an investment banker at the firms Morgan Stanley and Goldman Sachs prior to working for DHS. He also served in the CIA‘s National Clandestine Service, and graduated from Columbia University in New York.

He also cautioned that recent federal retirees to be realistic about opportunities in the face of a tough market, especially within the U.S. federal contracting space. Sweet urged them to look beyond the Beltway for exciting opportunities in areas like cyber security, big data and ISR.

“I would encourage folks to plan early, be mindful of their skills and position themselves for optimal success.”

“I would encourage folks to plan early, be mindful of their skills and position themselves for optimal success,” he said. Additionally, Sweet said that two ideas come to mind and they are almost diametrically opposed, yet important.

The first centers on the misunderstanding that because people have run organizations that didn’t have a profit and loss statement, they don’t understand business.

That’s false, he said. “Anyone who has run a large organization, knows how to manage people and lead, and that is extremely valuable,” Sweet said.

People need to understand that if they go into the private sector it is a for-profit effort, he noted. “They need to be mindful that the private sector is about bringing real solutions to real customers with real problems. That is called sales,” he said.”If they think sales is a dirty word or if they are not prepared to aggressively advocate for their future employer, then that is a problem. They need to think about going to a think tank or a not-for-profit, which are very valuable and play important policy roles.”

When Sweet was at DHS, one of his many challenges was to think the unthinkable, determining and testing what would be the most catastrophic scenarios that could face the United States.

These are scenarios that would overwhelm state and local governments and require federal support to address. There are eight core catastrophic scenarios that DHS has on-the-shelf plans for, Sweet said, and there are sub-plans within each of those. Sweet pointed to two sleeper threats of high consequence and much higher probability — cyber security and biological events. The world is starting to wake up on cyber, he said, but is still asleep on bio.

“We’ve got a long way to go but the bad guys are doing enough bad stuff that we are starting to get a lot of attention to it. It’s not just government; we’ve got some really talented bad guys in the private sector, too. The combination is starting to heighten public awareness.”

“Think about things like the Target security breach, Neiman Marcus, Michaels, combined with 30,000 computers eviscerated by the Iranians, or CitiBank, Morgan Stanley and others having multi-million dollar outages on their websites from state-sponsored Iranian attacks,” he said.

That shift from theft to destruction has awoken people to the potential consequences of cyber security threats, Sweet explained. “There has been some progress made; both the Bush and Obama administrations incrementally rolled out national-level exercises to cope with that,” he said. “We’ve got a long way to go but the bad guys are doing enough bad stuff that we are starting to get a lot of attention to it. It’s not just government; we’ve got some really talented bad guys in the private sector, too. The combination is starting to heighten public awareness.”

Solutions to help counter threats are imperative, he said, along with the government partnering with its contractors to implement those solutions in a cost-effective way.

In addition to security threats, budget uncertainty and sequestration continue to be challenges facing government agencies and contractors. And more contractors are giving serious consideration to straddling the commercial and government contracting markets, Sweet said.

For quite some time the mergers and acquisitions market in the defense and security sector was somewhat stuck and that’s a function of both uncertainty and unrealistic pricing expectations between buyers and sellers, Sweet told WashingtonExec. Now that is changing, he said, and it’s been an important trend that’s likely to continue.

“There’s a little more budget certainty, certainly in the Washington environment with the Murray Ryan agreement. There’s also a more realistic view of pricing between most sellers and buyers, he said. “That has really helped facilitate a better market.”

In the spirit of full disclosure, Sweet noted his company’s advisory efforts for Veritas Capital and the SI Organization on the acquisition of QinetiQ.

“What you saw with QinetiQ is just the beginning of what is likely to continue to be a very robust market in 2014,” he said. “If you look beyond the Beltway, we are seeing that in the commercial enterprise space as well in certain hot sectors. If you look at FireEye’s acquisition of Mandiant, that’s an example of a highly attractive market segment where Cisco Systems bought Sourcefire.” Sweet went on to say, “Our sense is that it is only going to get faster. . . it is a ‘eat or be eaten’ market. Companies should either acquire or take advantage of the market by combining with certain other organizations that have capabilities they don’t or they recognize. The federal space is a tough market and many company leaders will need to make critical decisions on potentially selling themselves to the right potential acquirer.”

Tracy Bell contributed to this report.