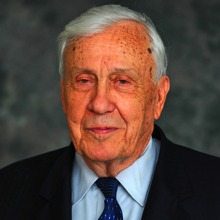 In March 2014 the Intelligence and National Security Alliance (INSA) published the white paper: “Leveraging Emerging Technologies in The Security Clearance Process.” The paper focuses on the periodic reinvestigation (PR) programs and why continuous monitoring and evaluation (CME) is necessary to prevent security breaches by clearance holders such as Edward Snowden and Bradley Manning.

WashingtonExec spoke with Charles “Charlie” Allen, legendary spy and former Under Secretary for Intelligence and Analysis at the U.S. Department of Homeland Security (DHS) and DHS Chief of Intelligence under the George W. Bush Administration on this topic.

Today, Allen is Principal at The Chertoff Group, a risk management strategy and M&A advisory organization for the national security space. Described as a “workaholic” by many, Allen serves as Senior Intelligence Adviser for INSA, and, along with Kathy Pherson of Pherson Associates, LLC, headed the Security Policy Reform Council’s recommendations.

We asked Allen why he sought to take a leadership role in revamping security clearance reform, how the national security space can continue to recruit top candidates, and what next steps must be taken by the Intelligence Community (IC) in order to prevent future security breaches.

When at DHS, Allen found the security clearance process sluggish, complicated and unwieldy to support a fast-paced mission. Therefore, when Allen joined INSA in 2009 he asked INSA’s then President Ellen McCarthy if he could chair a task force on security clearance reform.

“Progress had been made by Jim Clapper, the Under Secretary of Defense for Intelligence, with the 2004 Intelligence Reform and Terrorist Prevention Act,” said Allen.

“But when I looked around the community I found that progress was uneven despite what Jim Clapper had done. I was also impressed by Admiral McConnell, when he was the Director of National Intelligence, who emphasized the need to get contractors cleared and contractors with clearance to move from one contract to another,” Allen said.

Allen believes that security clearance reform started to gain momentum with the Bradley Manning breach in early 2010. He also acknowledges that it is often small and midsize federal contractors that are the most enthusiastic about streamlining the security clearance process.

“Since I’ve been [at The Chertoff Group]I’ve talked to CEO’s about the cost of getting contractors clearance to work on contracts and it is really – the cost is quite serious. It comes right off the top but then, of course, they put an additional 10% or whatever the figure is in their proposals. They build in to pay for inefficiency in the security clearance process,” said Allen.

“Since I’ve been [at The Chertoff Group]I’ve talked to CEO’s about the cost of getting contractors clearance to work on contracts and it is really – the cost is quite serious. It comes right off the top but then, of course, they put an additional 10% or whatever the figure is in their proposals. They build in to pay for inefficiency in the security clearance process.”

However, with declining budgets, the question remains: will security clearance reform continue to be at the forefront of investment for Congress? Allen believes that instead of keeping an every three to five years far-reaching reinvestigation model, implementing an ongoing eligibility system will not only prevent insider threats and defectors, but will also eventually reduce government spending.

“I’ve been a strong advocate for both government and contractors to use continuous monitoring and evaluation. It really is important because we just don’t have the time, money or resources to have periodic reinvestigations every five years– people change. We have to develop ways of updating people more quickly and be able to understand what they are doing inside the networks that are classified or closed.” said Allen.

Allen went on to say that the public and private national security sectors must update current evaluations to include employee on-line social media usage, patters and unusual behaviors.

Defecting from the US is nothing new—Aldrich Ames, Robert Hanssen and John Walker Jr. come to mind. However, it cannot be understated that each the most recent security breaches by clearance holders presented in “Leveraging Emerging Technologies in The Security Clearance Process,” are part of the millennial generation, those born between 1980 and the early 2000s.

We asked Allen how he trusts the national security space can continue to win critical talent when competing with the commercial sector. The millennial generation is the most vocal cohort against what they see as invasive monitoring on personal platforms such as social media, email and private phone calls.

“I think the young millennials, the young people – I think we are going to have to do a better job. We want the very best and we must have the very best to work in national security. I really am worried, and I think we have to do a far better job of providing explanations, transparency and accountability. I’d like to see the press write articles about threats to our national security and threats and damage to sources and methods as a result of the Snowden leaks, which I think have been very damaging and have put people’s lives at risk. I find it unconscionable that some people and some journalists seem to not pay much attention,” said Allen.

“I really am worried, and I think we have to do a far better job of providing explanations, transparency and accountability…I find it unconscionable that some people and some journalists seem to not pay much attention.”

Allen went on to say, “If you want to work in a challenging and cutting edge data science and you want to get into the extreme high-end technologies and the challenges such as building algorithms, solving cryptographic codes – there is no more exciting career than to work in the world of NSA.”

INSA’s white paper discusses the use of a secure and self-reporting web portal, making clearance holders accountable for reporting changes in their personal lives—such as marriage, divorce, foreign personnel contact and financial health. By allowing clearance holders to manage their own online representation, or “ePersona,” a term coined by the white paper, employers will receive better data, insight, and will also save money.

“We need more metrics, particularly from the contractor world. They are hesitant to give us the data because they feel that if they are identified, somebody might hold it against them,” Allen told WashingtonExec.

WashingtonExec concluded the interview by asking Allen to pick his favorite (unclassified) memory from his 40 years at the CIA.

“When we captured the hijackers in April 1986 of the hijacked cruise ship, Achille Lauro,” Allen said.

The “Leveraging Emerging Technologies in the Security Clearance Process” is available online through the INSA website, along with INSA’s most recent white paper, “The Operational Levels of Cyber Intelligence”.