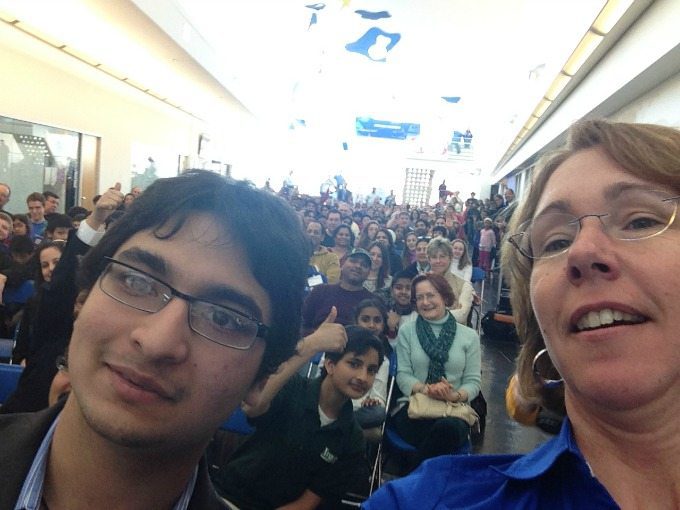 Archis and Dr. Sandy Magnus, “selfie” at the STEM Symposium

Despite the suggestion in the hit movie “Gravity” that space can be an incredibly scary place, astronaut Dr. Sandra Magnus assured the audience at Saturday’s STEM Symposium, that space has been nothing but fun and adventurous for her.

As a nod to Ellen Degeneres’ now-famous Celebrity Oscar selfie, Rob Zitz, Senior Vice President at Leidos, co-Chairman of the STEM Symposium and moderator of the panel, suggested the two panelists take a “selfie” with the the eager crowd behind them.

In talking about her experiences working at the International Space Station and taking part in high-profile NASA missions as well as how she became an astronaut in the first place, Dr. Magnus said she was exposing the young students to possibilities open to them by studying math and scientific fields. 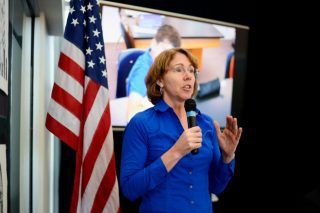 The value of a STEM (science, technology, engineering and mathematics) education was the major theme of the day’s panels, with professionals in a number of fields providing insights and accounts of their paths. The final panel, featuring Dr. Magnus and Archis R. Bhandarkar, a student at Thomas Jefferson High School for Science and Technology (TJHSST), was particularly well-attended and provoked the most questions from the hundreds of parents, teachers and children in attendance who wanted to know everything from how to eat in space to how it feels to be in a zero-gravity environment.

As she answered, more than anything, Dr. Magnus encouraged the youngsters to dream big, remain curious and not to let anyone stop them.

“It’s hard to picture yourself as an astronaut, but don’t be afraid. Go after it,” she said, explaining that she wanted to test herself to see if she truly could become an astronaut. “I didn’t want to look back and think, ‘What if?’”

Dr. Magnus grew up in a small Illinois town and began thinking about a career in space in middle school. 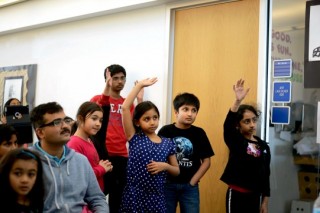 “I was one of those kids always asking questions ‘Why, why, why,’” she said. “I drove my parents crazy. Physics was a fun place to go and answer these curious questions.”

It was in college that she discovered that engineering was a means of “taking physics and building something with it.” That led to studying electrical engineering. Then Magnus entered the study of materials, a field she “didn’t realize existed until then.”

“The moral of the story is you don’t know what you don’t know about what might excite your passion and your interest,” she noted. “As you go through your life …you suddenly see a whole other range of choices. The world gets expanded more and more.”

She also encouraged the students to not be intimidated by math or the numbers and equations so integral to its mastery.

“Math is basically a language in the same way that English is a language or Spanish is a language, but instead of words we have numbers and symbols,” Dr. Magnus explained. “Math is the language we use to describe the world around us. So as a physics person you use math to describe things versus an engineer who uses math to build things.”

An alumnus of the Nysmith School for the Gifted, where the symposium was held, Bhandarkar also provided a message centered on satisfying curiosity.

“Science is the idea of exploring questions, chasing the big ideas we want to solve,” he said.

When you look at these four different fields (science, technology, math and engineering) what’s the one thread that connects them all? Curiosity, the willingness to ask big questions, to explore new realms.”

Personally, Bhandarkar, who is scheduled to start college at the Massachusetts Institute of Technology (MIT) in the fall, said he remembers always posing questions and wondering about the world around him.

“I remember asking, ‘Is it possible that there are numbers before one?’” he said. “(My mom) played along with me; she didn’t say, ‘that’s not on the test.’”

That encouragement was incredibly important in harnessing his interest in STEM subjects. As a result, Bhandarkar stressed the need for parental support in promoting learning.

“Behind the curiosity you need positive feedback and community to encourage your curiosity and to make you even more excited about your passion,” he said. “Even as a kindergartener, (at science fairs) just giving that presentation and getting that feedback, it made me feel like a scientist.”

Throughout the day, Zitz and various speakers encouraged children to not let fear hold them back. To make this point, Zitz asked Dr. Magnus how an astronaut overcomes the human response to fear of the unknown? Magnus replied, “we practice and practice until it becomes natural, and then we focus our energy on achieving our mission.”

The all-day symposium lead up to the third annual USA Science and Engineering Festival, the country’s only national science fair, on April 26 & 27 at the Walter E. Convention Center in Washington, D.C.