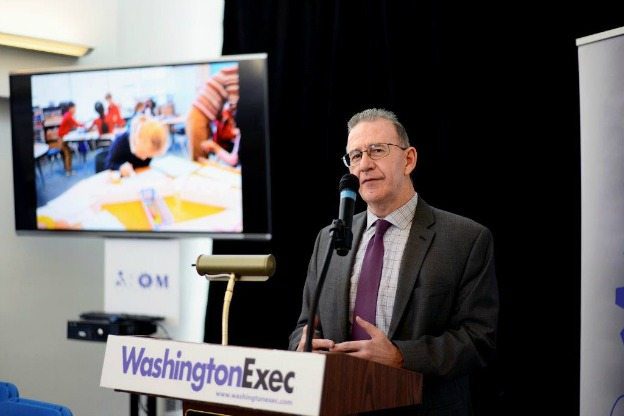 The ability to get a good grounding in science and technology is the key to unlocking the secrets of the future.

The hopeful message formed the basis of the keynote address by Rob Zitz of Leidos and Ted Cope of the U.S. National Geospatial-Intelligence Agency (NGA), during Saturday’s inaugural STEM Symposium, organized by WashingtonExec at the Nysmith School in Herndon, Va.

Ted Cope, the director of basic and applied research at NGA, was the featured speaker mid-morning. He used his address to encourage the 1,500-plus parents, students and business leaders in attendance about the importance of studying science and math, as well as explained how he progressed to hold several key government roles including with the once-covert National Reconnaissance Office.

“Technical education connected to a rich imagination” was one combination he touted during his talk, explaining that “arts and science are not North and South Poles” but complementary knowledge areas.

Personally, Cope recalls growing up in the thick of the Cold War in which “our national goal was to put a man on the Moon.” To have this sense of urgency around reaching space and then, in 1969, as he was graduating from high school, to see it realized, had an impact and made him realize the value of pushing one’s imagination. He also became fascinated early on with computers.

“Now, what kids have today in their hands are amazing capabilities that even the president didn’t have in the past,” Cope said. “The technology is just amazing.”

Beyond modern technology’s power, Cope suggested that humans have a unique capability that allows for them to succeed in scientific fields.

“Dogs have an ability to sense the world through their nose,” he said. “Our X-Men ability is to take two things and put them together in a way that makes something new, that doesn’t exist before. To take that imaginary thing and turn it into a reality. Our other great gift is the ability to communicate it along with creating.”

At the same time, he spread a message to attendees of constant learning and a willingness to keep growing.

“When you realize how little you know, that is the point of real wisdom,” Cope said. “Knowing what you don’t know is actually a powerful tool so you don’t make a mistake.” 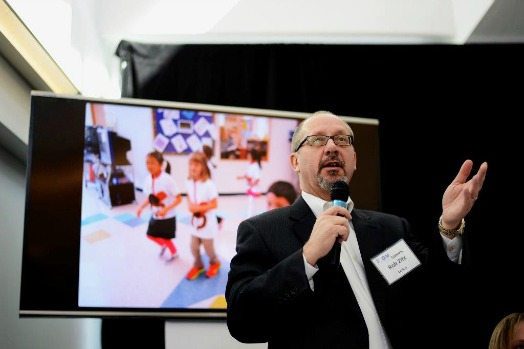 Leading up to Cope’s remarks, Rob Zitz, Senior Vice President for the Leidos National Security Sector, set the stage for the prospects of STEM employment in the private sector, and the gaps to overcome. Leidos, for example, provides solutions in the health, engineering and national security fields; they draw their 23,000 employees largely from those with science, technology, engineering and mathematical backgrounds.

“As we look over the next 10 years STEM jobs in the United States are projected to increase significantly,” he said. “So clearly having a background in STEM positions and readies you for the future.”

He continued, “broken down by field, the next decade will see a 16 percent increase in careers in math, a 32 percent surge in medical scientist-related careers and a staggering 62 percent growth in careers for biomedical engineers.”

The problem is the United States isn’t keeping up with this demand, according to data provided by Zitz.The number of students earning college degrees has risen dramatically, yet the share of those pursuing science, math and technology fields is actually declining. Zitz noted that encouraging children to learn STEM skills is critical to filling the gaps, and he also noted that encouraging girls and minorities to pursue STEM degrees is particularly important to help close the shortfalls.

Zitz used as examples the first two panelists of the Saturday Symposium, Ann Barron-DiCamillo, Director of the Department of Homeland Security’s US Computer Emergency Response Team and Michele Weslander Quaid, a Chief Technology Officer from Google.

“Ann and Michele are brilliant women who have reached remarkable heights in their careers. When they were young they were encouraged to ask questions, never be afraid to try new things, and learn from failures. They had parents and teachers who helped them realize they could accomplish anything. They are great role models for not only young women, but for all of us.”

“The fact is, we need a lot more like them,” he said. “Closing this STEM gap will only happen with strong partnerships between parents, teachers, government and industry supporting the children. Events like this symposium demonstrate how we can work together to achieve our goals.”

Photos are by Abigail Gorden.