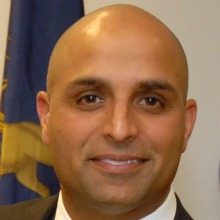 B. Chatterjee, co-Founder and CEO of CNSI

B. Chatterjee is co-Founder and CEO of CNSI, an information technology (IT) and business process outsourcing (BPO) solutions company that serves a diverse base of federal, state and local government agencies, and commercial enterprises:

While the Democrats will want to ensure the current and new entitlement programs such as the Affordable Care Act and associated Medicaid expansion, extended unemployment benefits, and veteran’s pension programs are supported this year given that the economy has not fully recovered, the Republicans will want spending cuts to curb the deficit growth. The federal government will have to make some tough decisions in 2014 on where it is able to spend money. Obviously, this will certainly require re-appropriation of government spending in those areas – especially reallocating funds into sectors such as Healthcare and fields such as Data Analytics across all sectors.

Although we can surely expect a negative impact on the size, scope and viability of government contract work during this year due to the challenges involved with the Healthcare.gov rollout. As a precaution CMS and other federal agencies are going to reevaluate their procurement strategies from top-to-bottom.  Due to this at CNSI, as a mid-tier client focused turnkey solution provider, we see areas of vast potential for a number of industry sectors to execute significant advances on behalf of the government. For example, in late 2013 we saw the first ever cloud computing model applied to state-run Medicaid management systems, allowing for new efficiencies and cost-savings never before realized. That model and cloud computing in general is something that can truly modernize and expand capabilities for the ways state and federal governments compute and make use of huge sets of data.

Similarly, federal and states governments will be looking to bring in efficiencies in other mission critical systems and there procurements.  All in all, once again IT system integration work will come back in vogue to provide government turnkey solutions rather than government hiring “consultants” and solving IT problems just by themselves. Each of those areas will bridge gaps between the government and private sectors build efficiencies and ultimately result in cost-savings. And this partnership and collaboration is something we can all look forward in 2014.