You are at:Home»News»Federal Government»Federal Mobile Summit Panelist Robert Palmer Talks Next Gen and Mobility at DHS 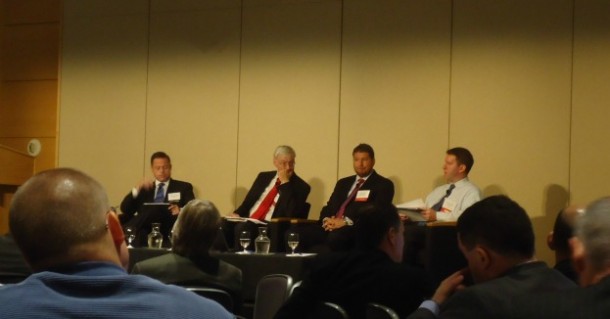 Palmer, Director of Information Assurance at DHS,  almer.  move that data.ture baseline is still needs updates at DHSics has it’secure mobile devices on the infrastruce, anwas able to give the packed room a synopsis on what his department is working towards, and where he sees growth for the agency in the next couple years. According to Palmer, the Digital Government Strategy proved that collaboration is key when implementing secure mobile devices on the infrastructure, and he urged his colleagues to continue to “bounce ideas off of each other”.

“We are still working through how we use mobility to change the way we deliver IT services and data. One thing I want to highlight is that the Digital Government Strategy taught all of us that it can be done. It is the model going forward,” said Palmer.

Keith Martin, National Director of Federal Sales at Sprint and Summit sponsor, agreed with Palmer. “It feels like more energy is going into mobility now than at any point I can remember. If I had to pick a star of the show, I would say that folks were most interested in MDM. It feels like we are really close to massive roll-outs of MDM. There was really a positive feel at the event.”

Next generation needs and data security for DHS were also key points made by Palmer during the hour-long discussion.

“We are going to spend a good bit of effort on agile development, on continuous integration, and ask how we look at application lifecycle management,” Palmer told the audience.

Palmer went on to say, “We to are trying to get a handle on these [mobility]pilots. And set the way forward and in a more intelligent manor. How do we do tech exploration? How do we let things develop in the marketplace, but at the same time, pull those things in when they are ready to coordinate?”

Moving beyond mobile pilot programs is only possible if data security meets privacy standards and and releasing government data is achieved, noted Palmer.

“Right now we trust containers, that is just kind of what we do,” said Palmer.

“We eventually want to get to the point where we trust the data-we can tag it, label it, monitor it as it moves throughout the infrastructure, as that trust model expands, we can hopefully continue to develop the technology,” suggested Palmer.

However, like all next generation technology capabilities, a secure infrastructure baseline is still needed at DHS.

“A big one is authentication. We need to know who is assessing the data…If we are going to get to the point where we are utilizing the collaborative technologies that are out there we need the infrastructure to be efficient and be able to move that data,” said Palmer.

“In closing, the digital government strategy really set that model going forward. I for one, am very appreciative of the willingness of all the parties for coming forward to achieve the success that we have,” said Palmer.

Find photos from the event on the WashingtonExec facebook page.