You are at:Home»Events»Jana DiCarlo Steps Down as Executive Assistant Committee Chairperson 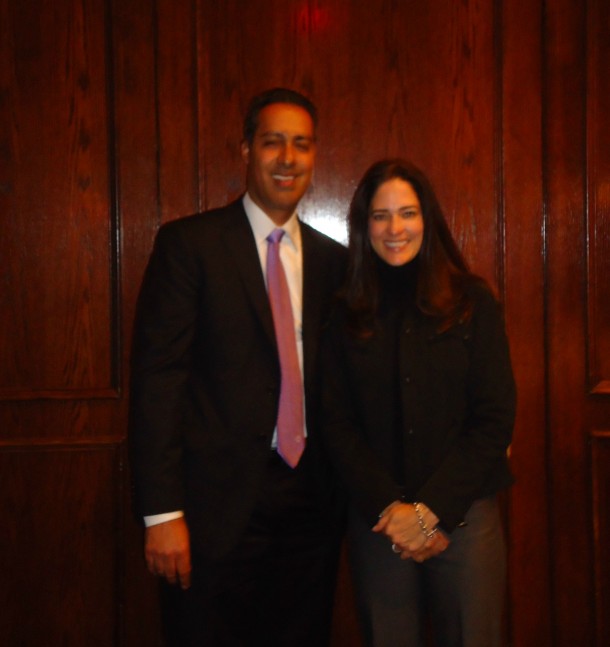 The WashingtonExec Executive Assistant Committee has come a long way since its inaugural wine tasting at the Capital Grille Tysons Corner in July 2011. Today, the committee has expanded to three groups with over 100 members, who are among the most influential executive assistants in government contracting. Last week, Jana DiCarlo, Executive Assistant to Ed Casey, CEO of Serco, Inc., stepped down from her 1-year appointment as founding Chairperson.

“When JD pitched the concept of the WashingtonExec Assistants group to me, in a matter of a few conversations, my role with the group morphed from member of the host committee to keynote speaker to chairperson.  As the EA to a very busy CEO, I wasn’t sure how I would find the time for more responsibility.  After nearly 25 years as an EA, however, an opportunity like this had never been presented to me, so I decided I’d find the time.

As a group leader, I garnered experience in public speaking, mustered the gumption to ask CEOs for event sponsorship, and formed relationships with some of the DC area’s truly most powerful women (and a few men!),” DiCarlo told WashingtonExec.

The WashingtonExec Executive Assistant Committees was formed with a goal of outcome-based and result oriented networking.   The group is designed to: enhance the profession, share best practices, build an exclusive community of EA’s working in the government contracting sector, set up a mentoring program for newer EA’s with more experienced professionals, personal development, and networking.   Many EA members have moved with the executive they support from position to position, company to company.   This one-of-a-kind group fills a void and offers a leadership opportunity for a critical direct report of any successful  government contracting executive.   The reaction among the executives has been overwhelmingly positive of their EA’s to be part of the program.

“As EAs, each month, we see pictures on the cover of every business magazine tooting the horn of one CEO or another.  We read about how they turned a company around, how they made a difference, how they made their mark.  After spending time with some of the most bright, organized, hardworking people in government contracting, I know exactly how they got to the cover of that magazine,” said DiCarlo.

Executives have many opportunities to form professional connections and partnerships: why can’t their Executive Assistants?

“I can’t say enough about the importance of the working relationship between the Executive and Executive Assistant (EA).  An outstanding EA will make a good Executive even better, which contributes to the overall effectiveness of the leadership team.  The EA is also the ambassador for the Executive as the EA represents the Executive and sets the tone when interacting with employees, customers, partners, etc.  Throughout my career, I have had the very good fortune of having some outstanding EAs on my team.  Each one provided support, influence, counsel, and insights that were key to my success and the success of the organization. I consider the EA position to be a key role on any leadership team,” said Sid Fuchs, President and CEO of MacAulay-Brown, Inc. (MacB).