You are at:Home»Execs to Know»Defense CIO Teri Takai Talks Mobile Pilot Programs And “What Keeps Her Up At Night” 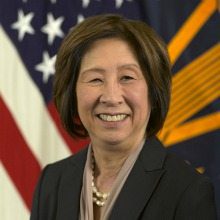 Teri Takai, CIO of the Department of Defense

On a more personal note, Takai described to WashingtonExec the two aspects of her job that “keeps her up at night,” the leadership book that made the largest impact on her (Getting To Yes), as well as who she most admires from her time in the public sector.

Takai reported to WashingtonExec that the Department of Defense is ahead of schedule for closing 52 data centers…it is set to close 57 by end of FY2011.

WashingtonExec:  Mobile technology feels like the new buzz word of 2012.  The U.S. Army has started a mobile applications store.  Do you plan on using such initiatives in the future?

Teri Takai: I certainly agree that mobile devices are going to be a big part of our strategy and our movement in 2012 and beyond. The commercial mobile devices that are on the market today don’t have the same level of security that we would normally have in our devices. Obviously with the advent of the kind of cyber security attacks that are hitting us on a daily basis we have to be especially concerned. The challenge for us it to be able to provide a secure backbone and to make sure that we can control the devices.

We are trying to ensure that we have a way of being able to share across the services but also when we are in a joint environment there really isn’t an Army, Navy, Air Force or Marines – it is one force. We’ve also formed a commercial mobile device working group that brings together over 200 people at DOD because we have upwards of 50 pilot projects going today around all of the kinds of devices that you could imagine out there looking at all of the different ways that we want to move forward.

WashingtonExec:  Are there any pilot programs that you are particularly excited about?

Teri Takai: The Marine Corps has been actively using the Blackberry Tablet to provide information to their senior executives.  The Navy is doing some work with Apple and the good technology to do the same thing.  The Coast Guard is experimenting with IPads as well.  The Army has been really exciting in that it has been looking at what are the kinds of applications that are actually going to be used by the soldier on the ground to be able to communicate. The Marine Corps also has done some great work around taking all maps that they normally would have on paper and putting them onto an IPad so that the Marine Corps pilots have them actually for use in the cockpit.

Teri Takai: I would wish that I had that same ability to feel comfortable but I tell you there are two things that do keep me up at night. The need for the Pentagon, with all the bureaucracy and all of our processes and changes, to be able to make sure that we are doing what is best for those individuals. The second, I also worry about is the size and scope of the Pentagon, it is sometimes difficult to see that we are making some difference. The challenge for me is to try to think through and find a way that we can take some of the things that we really want to get done and really work them through the process so that they end up making a difference.

WashingtonExec:  How is the process of closing those fifty data centers of the Department of Defense going?

Teri Takai: We are on target for our FY11 completions. In fact, our original target was to close 52 data centers and we will end up closing 57 data centers. We are looking at how we can take our consolidation of data centers and use that as a way to move towards virtualization. It is also a part of our strategy to shut down old applications and then create private clouds.

WashingtonExec:  What is a book that has made a large impact on you?

Teri Takai: There is a book that has been around forever called Getting to Yes. It’s a very short book and I hand it out very often to my senior leadership because it talks about how you work together, how you work with others and through negotiations how you really help get your message through and be able to accomplish the objectives that are you are most passionate about.

WashingtonExec:  Who is someone you admire either professionally or personally?

Teri Takai: I’ll give you three individuals who have really impacted me significantly. Governor Jennifer Grandholm of Michigan had a passion for public service and a passion for running government that really allowed me to take the CIO role into being a very instrumental part of her Cabinet. The second person that I really admire is Governor Schwarzenegger. He was in a very difficult state. He had made a commitment around what he wanted to do with information technology and for the three years I was there he never wavered. He was proactive in soliciting that and asking us for the kinds of things that we needed and he helped us move our legislative agenda forward.  You can’t get anything done in a big state like that in a short period of time without that support.  The third person is Secretary Gates. I felt the work that Secretary Gates dealt with very difficult situations. From an interpersonal basis he continued his work objectively. The clarity with which he was able to see through very complex issues is something that I will always admire.  The other thing is that the three individuals that I talk about were just outstanding communicators but they were outstanding communicators in very different styles.