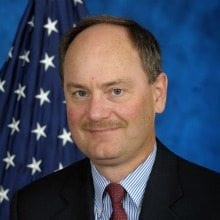 All things considered, Roger Baker is a straightforward businessman; his interview with WashingtonExec is no exception. Baker described running his $3 billion enterprise as well as how his former position as CEO of Dataline prepared him for his current role as CIO of the U.S. Department of Veterans Affairs. Baker also gave some advice to the new federal CIO, Steven VanRoekel, and explained where he sees the future of cloud computing in the federal government.

WashingtonExec:  How would you describe your role as the CIO of Veterans Affairs?

Roger Baker: I’m actually a software guy.  My education and my technical background really are in software systems.  I was a classic private-sector person until about 1998 – I started and helped sell three software/internet companies.  I actually came into the government as the CIO for the Department of Commerce; they were looking for someone who had an internet background to really work on some of the key issues for the Secretary at that time.  I left government when the Administration changed and came back eight years later in the next Democratic administration.  I am currently the Assistant Secretary at VA and Chief Information Officer.  It’s pretty much like being the Chief Executive Officer of a $3 billion IT services organization.  Unlike any other departmental CIO in the federal government, I actually have control of all of the resources and all of the money that do all of the IT services inside the 2nd largest federal department, which is what VA is.  VA, as an organization, is about the size of a Fortune 500 company.  It’s a pretty big organization; 330,000 employees serving about 7 million veterans a year from a healthcare standpoint and about 3 million from a benefits standpoint so it is a pretty good size.

WashingtonExec:  Given the current economic climate how will you view the inevitable budget cuts at Veterans Affairs and how will you position the VA for success in the future?

Roger Baker: I don’t think it is clear, given the political environment, that there are budget cuts coming for veterans programs.  The nation highly values the services that veterans have provided them and I think it is one of the areas where the citizens really care.  I want to be clear that I don’t think we’d use the phrase inevitable budget cuts at VA from that standpoint.

WashingtonExec: How did your career in the private sector prepare you for your VA CIO position?

Roger Baker: I’ve been a government executive before, so I knew what to expect from a bureaucracy standpoint.  What’s interesting is that the CEO job really was the best training for this job. The title may be Chief Information Officer but this organization runs like a $3 billion company and you think about customer service and you think about maximizing return on investments and all of the same things that a CEO would think about. In a lot of ways my shareholders receive value from the IT organization.  It just happens to be that my shareholders are the taxpayers, not shareholders in a corporation, but it is the same thought processes.

That is why I led in with the fact that it’s a lot like running a $3 billion corporation — because if you run it that way then you will make the same kind of decisions here that you would make in the private sector.

WashingtonExec:  What are your views on cloud computing for your organization?

Roger Baker: My model of cloud computing is that there really are three levels in cloud computing.  We have an internal cloud at VA.  Most of our systems run in consolidated data centers and our hospitals and our benefits offices receive their services over the network and they really don’t know where their systems are running so that’s kind of an internal cloud.  We also have made use of external cloud services.  We have a number of our systems, especially on the benefits side, that actually run in third-party data centers. The third thing is what I call the personal cloud; classic things like Facebook, Google docs, Yahoo calendaring and a variety of things that our folks like to use; and the real challenge for us is in figuring out how to best deal with things in that personal cloud.  There are a lot of things that individuals are getting used to using that are very productive for them and they are looking to bring them into the work environment.  What that means is that we have to live in a world where we don’t control the application and we don’t really control the end user device.  What we have to control is what’s in between those two, which is the authentication of the individual and the protection of the information between where it is stored in the application and the user that’s reviewing it.

The one thing that I absolutely cannot give up as the CIO at VA is responsibility for the protection of veterans’ personally private information.  That’s a primary piece as we look at cloud computing.

WashingtonExec:  What advice would you give to the new Federal CIO, who will be managing a $81 billion budget among other things?

Roger Baker: I think he comes in pretty well prepared.  I know that he’s been working side by side with Vivek Kundra here for a few weeks. I would tell him that there is a balance between the pressure to cut the IT budget and the reality of what the IT budget is intended to do.  IT is all about automation and we’ve got quite a number of programs here at VA where we are spending money to improve the IT that will reduce costs in the business processes.  That’s specifically what’s there.  Jeff Zients, the first Chief Performance Officer of the United States, has a good diagram that points out that the government has lagged behind in taking advantage of productivity improvements that the private sector has taken advantage of from information technology.  There is a gap there over the last fifteen years or so.  I think that is one of the things that we’ve got to focus on — which is delivering very effective information technology that really helps improve the effectiveness of the business processes of government.  That really is what IT and automation is all about.

WashingtonExec:  What keeps you up at night in relation to your job?

Roger Baker: You took away my standard line which is I have a nineteen-year-old daughter. I have about 8,000 people that work for me.  It’s a well-run organization.  They are great folks.  They do their jobs well.  I don’t very often have an operational issue that keeps me up at night.  I will tell you though that when I wake up in the middle of the night and I start thinking about work – a lot of times what I’m thinking about is “how can we do this better”. The things that you see us doing at VA IT and the things that we continually think about are “how can we do it better”, “how can we have better security”, “how do we do better monitoring of our networks and our devices”, “how do we deliver on our development projects better”, “how do we make certain that we are providing better customer service for our folks inside of the organization.”