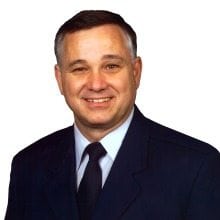 Meet Brigadier General Ronald Yaggi, a 27-year veteran of U.S. Air Force and Senior Vice President of Government Programs at i/o. i/o designs, engineers, and delivers digital energy technology for the world’s largest enterprises, governments, and service providers. Born in Mount Verson, Indiana, Yaggi was commissioned to various intelligence assignments including Korea and Hawaii. Yaggi has won several medals for his service in the military such as the National Defense Service Medal, Humanitarian Service Medal and Air Force Commendation Medal. Since retiring from the military, Yaggi joined i/o to educate decision-makers in the Government on the capabilities and potential cost savings of i/o’s modular data center technology. Yaggi sat down with WashingtonExec’s Aisha Jamil to discuss his background with the military, what his greatest achievement to date is and what advice he has for retiring vet looking to enter the private sector.

WashingtonExec: Could you talk about your professional background and what prompted you to join the Air Force?

Brigadier General Ronald Yaggi: I attended a military college, The Citadel, which instilled in me some much needed self-discipline. This basic foundation really helped me throughout my Air Force career and in the private sector as well. During my freshman year, I was offered a pilot scholarship for the USAF, but didn’t pass depth perception on the eye test. I opted for the Intelligence career field instead. I was fortunate to be stationed at an Air Force Special Operations base as my first assignment, where I was involved in the attempt to rescue American hostages from Iran. Initially I was the only USAF Intelligence officer from the unit, and I had the responsibility to plan flight routes for USAF Special Ops C-130s through dense radar, missile, and fighter coverage, both safely and undetected. So as a young Lieutenant, I was able to see the full capabilities of our nation’s intelligence assets – and I was hooked. Before I knew it, I had served 27 years and decided it was time to refresh my batteries and start a new career.

WashingtonExec: How does your typical day differentiate from being a General in the military to heading the Government Business Unit for i/o? Are there any similarities?

Brigadier General Ronald Yaggi: Actually, there are more similarities than differences. The ops temp is high in industry, you have similar “people” issues, and everyone is focused on performing the mission. The largest and most obvious difference is that most contractors are not in harm’s way. i/o has a great, highly skilled team. I feel right at home.

WashingtonExec: What will you be specifically be doing for i/o as their Senior Vice President of Government Programs?

Brigadier General Ronald Yaggi: i/o offers the most secure, technologically advanced and purpose-engineered modular data center in the entire industry, which can be deployed or placed in fixed or traditional sites . The i/o ANYWHERE® modular data center system, optimized and managed with an industry-unique, infrastructure operating and control system, called i/o OS®, can be rapidly deployed and scaled both centrally and in the field, and is engineered to withstand environmental, logical and physical threats. It has the potential to save millions of dollars over traditional real estate-based data centers, and avoids the staggering upfront costs of brick and mortar construction and fit-out of new or consolidating data centers projects.  After I met the i/o team, learned about the company and saw their products, I jumped at the chance to start and lead i/o’s Government Programs. Quite simply, my job is to educate decision-makers in the Government on the capabilities and potential cost savings of i/o’s modular data center technology. The system will sell itself.

WashingtonExec: Professionally (or personally) speaking, what has been your greatest achievement to date?

Brigadier General Ronald Yaggi: Our daughter and son-in-law recently blessed my wife and I with our first grandchild, Sophia Marie. In spite of numerous military moves, including my daughter attending seven schools in nine years and three different high schools, my greatest achievement is having an extremely close and loving family. From a professional standpoint, I would have to say working on the Conventional Armed Forces in Europe (CFE) Treaty between NATO and the Warsaw Pact from 1989-1991. This treaty resulted in nearly 50,000 Soviet (Russian) conventional weapons (tanks, artillery, armored fighting vehicles, attack helicopters and combat aircraft) being destroyed without a shot being fired.

WashingtonExec: What would your advice be to those that are about to retire from the military and want to pursue a career in the government sector?

General Ronald Yaggi: First, I would say “thank you for your service to our country.”  My advice would be to try to take some time off, at least a month or more if you can, to decompress, spend some much deserved time with your family, and recharge your batteries. Hopefully, you have thought about what type of career you want to pursue. If it is with the Defense Industry, I would suggest starting with a larger company. Oftentimes, in a smaller company, you have to take on multiple roles, such as operations, business development, contracting and HR as well as providing your own administrative support. Even if you have managed large programs and led thousands of troops, managing profit and loss (P&L) is different. I would suggest spending a few years learning business operations and development, and then consider moving to a smaller, entrepreneurial company. Of course, there are always exceptions, and as we say, “flexibility is the key to airpower.”