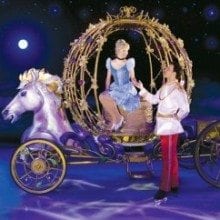 Dare to Dream, launching in Lakeland, Fla. on Sept. 2, features Cinderella, Tiana from Princess and the Frog and Rapunzel.  Treasure Trove, premiering on Oct. 5 in a North American Tour, shows tales from Snow White and the Seven Dwarfs and Tangled.

These two shows mark the 30-year partnership between Feld Entertainment and The Walt Disney Company.  Both Dare to Dream and Treasure Trove are led by two female sister producers, Nicole Feld and Juliette Feld.

“We are ecstatic to be able to bring audiences two incredible new ice shows this year that set the standard for the ultimate Disney experience,” says Producer Nicole Feld. “Because Tangled marks the 50th Disney animated feature, it was only fitting that we celebrate that achievement by including moments from Rapunzel’s story in both new shows.”

Both shows will take the audience through an ice adventure packed with action, singing, dancing, aerialist acts and your favorite Disney characters.