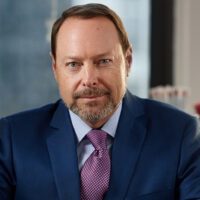 The idea that the U.S. can promote global peace through a system of “integrated deterrents” may be a policy yet without real teeth, Rep. Mike Gallagher (R-Wis.) said in a recent discussion with EverWatch CEO and retired Army Capt. John Hillen.

The two spoke at the National Review Institute’s Forum on Foreign Policy earlier this year as part of a lineup of speakers who addressed Russia’s ongoing invasion of Ukraine. They also discussed other U.S. foreign policy challenges such as the threat of China forcefully taking over Taiwan.

Hillen posed questions to Gallagher and also offered his own commentary in a session that aired on C-SPAN.

While both men agreed there is a venerable tradition of non-intervention going back to William Howard Taft in the early 20th century and earlier with George Washington in his farewell address, they also stressed a need for having military presence in strategic locations, for arming Taiwan and for being ready to fight if necessary.

“It seems that people want to thank me for my service in the airport, but then they want to express regret that I had to do my service ‘out there,’” said Hillen, who served overseas. “I always tell them, ‘Well, that’s where we do our work. We play away games. It’s better to play away games.’”

“We go through these cycles of disengagement and then finally having to rearm on less favorable terms,” Gallagher said. “. . . When I was in uniform as a brand-new hard charging second lieutenant in the Marine Corps, the last place I wanted to be was in garrison . . . I subscribe to what we could call the reluctant crusader hypothesis that there’s always been this tension in conservative foreign policy, this desire to embark on noble crusades internationally but a reluctance to pay the cost. And if you start to think about warfare since World War II, I think it explains a lot of the tension in U.S. foreign policy.”

Both men have served in the military and are writers and thought leaders. Hillen is also a former assistant secretary of state for political military affairs under the George W. Bush administration. Gallagher has served as a member of the Armed Services Committee and House Select Committee on Intelligence.

The Army, Hillen said, “is pretty underinvested” in the Indo-Pacific Command. “What they do is small but mighty, but it doesn’t seem like a proportional response to our No. 1 national security challenge,” he said.

“We need to arm Taiwan to the teeth yesterday,” Gallagher added. “. . . Our strategy is fundamentally a defensive strategy. We’re trying to defend the frontiers of freedom.”

The friction Russia has encountered in Ukraine may act as somewhat of a brushback to Chinese President Xi Jinping and deter a takeover of Taiwan, according to many in the intelligence community. But it probably isn’t enough to stave off the likelihood of a coming shift in world power, Gallagher added. Put in place sufficient capability to deny an aggressor their objective and “you don’t have to make strident statements about punishment in order to deter,” he said.

Gallagher added there needs to be a reckoning with the recent past to move forward with further military goals.

“(We should) engage seriously with the arguments that the so-called isolationists are making because I do think there are some important points and I do think prudence is a healthy instinct when it comes to geopolitics,” Gallagher said.

He continued, “I do think it’s fair to say the Iraq war and the war in Afghanistan were inconclusive and financially ruinous and there were multiple mistakes made throughout all phases of the war. We should grapple with that seriously. We did not deliver, I think, adequately, and we can’t expect the American people to support such an inconclusive outcome without the president explaining OK we’re going to keep 2,500 or 5,000 troops there and here’s what they’re going to do and why it’s a good investment. The American people are not idiots. I think if the president explains and levels with them, I think they will understand.”

WATCH: Nikki Ferraro on Fighting Cancer as a Teen and Bite Me Cancer Annual Fundraising Dinner