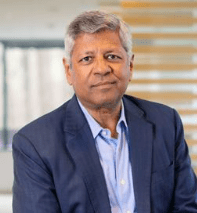 Professional services firm Dexis has added Sudhakar Kesavan to its board of directors.

“Sudhakar’s background is so relevant to a socially-focused professional services firm such as Dexis,” said Mihir Desai, founder and CEO of Dexis. “His approach of doing well and doing good aligns clearly with ours.”

Kesavan served as chairman and CEO of professional services firm ICF for over 20 years, guiding ICF through an extended period of expansion that included multiple acquisitions and growth in annual revenues of over $1.5 billion.

Kesavan was named a Tech Titan by Washingtonian Magazine and was inducted into the Washington Business Hall of Fame. He also led the effort for ICF to become the first professional services firm in the world to achieve carbon neutral status. He was also

“I am impressed by Mihir’s success in founding and building a mission-oriented business,” Kesavan said. “His ambition in continuing to grow the services offered by Dexis to deal with complex social challenges worldwide is admirable and entirely possible.”