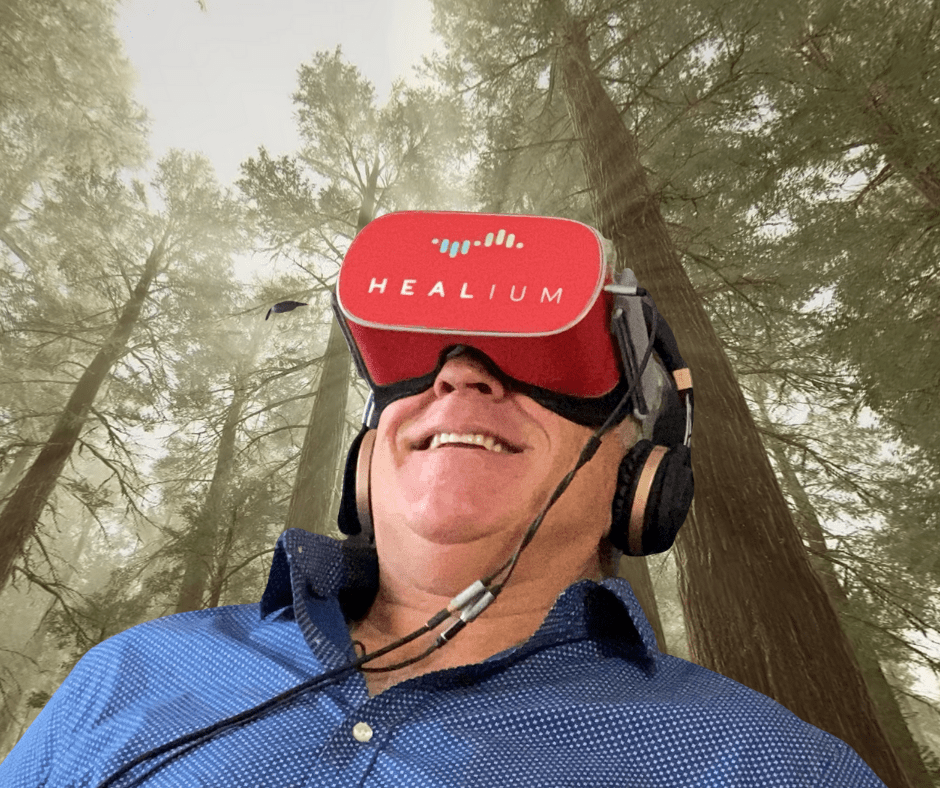 As public health advocates work to bring awareness to the importance of hand-washing, a former TV news reporter is promoting a tool aimed at cleansing the mind.

Armed with a groundbreaking approach that leverages augmented and virtual reality, Sarah Hill’s Healium platform is designed to offer nearly instant stress relief — and train users over time to take more control over their stress responses.

“Healium is a first aid kit for stress management, and it allows companies and individual users to escape their current reality and to quickly downshift their nervous system by being somewhere else,” said Hill, who wears the titles of CEO and chief storyteller.

Started five years ago and powered by consumer wearables, such as VR goggles, an Apple watch to measure heart rate or an EEG headband measuring brain patterns, Healium facilitates a kind of meditation using augmented and virtual reality. Users look at or through their device to view pleasant scenery, and as they become calmer, the devices pick up on heart rate and brain activity and provide them with visual rewards, so they are essentially powering the experience with their own minds.

Users can select the kind of experience they want — watching the planets illuminate, floating through a fractal animation, or traveling up a beautiful waterfall in South America, for example. It’s designed to help users become more self-aware of their own brain patterns and heart rate.

“It basically allows you to see your stress so that you can learn and train yourself to control it,” Hill said. “Healium is like a mental fitness tool, much like you would pop a tape in the VCR or something like that, you’re putting on the goggles and you’re being someplace else.”

Based in Missouri, Healium has clients across the U.S., including a thriving population in the Washington, D.C., area, where representatives share the stress management tools with corporations, government contractors, emergency responders and anyone who may want relief.

Healium launched about five years ago, but the groundwork for Hill’s desire to create it began decades ago. For 20 years, Hill worked as a TV news reporter covering trauma after trauma: rapes, homicides, murders, the aftermath of a tsunami and on and on.

“Ultimately, my media diet of that negativity made me sick,” she said. “I started having panic attacks for no apparent reason and eventually had to get out of the news business. I developed Healium for me as well as the 41 million people out there who struggle with anxiety.”

Now with two grown children, Hill is focused on sharing Healium with others.

Just as people use soap and water to wash their hands, they can use Healium to wash their minds, Hill explained. The platform, she said, is a short-term media cleanse, a toxic cleanse for the life dirt that invades our brains. And in a year burdened with a pandemic, higher unemployment rates and political elections to boot, the need for that cleanse may be increasing.

“Healium is clinically validated to downshift the nervous system,” Hill said. “It, in three peer-reviewed journals, has been shown to reduce anxiety in as little as 4 minutes. It doesn’t require a lot of training or long classes. It’s just open the app, and be somewhere else.”

It does not replace medications, counseling or therapy, Hill said, and it isn’t a diagnostic or treatment tool. Healium is for self-awareness and to remind users that their thoughts have power. Anxiety is the cause of 60% of all illness and disease, the rate of suicides is rising and billions of dollars are lost each year because of employee absences caused by stress.

For thousands, Healium does lower their heart rate and sometimes other symptoms such as high blood pressure or the frequency of panic attacks, Hill said.

Healium has been featured in many leading national news outlets, including The Wall Street Journal, CBS News, Forbes and National Geographic. It can be used with VR goggles or with just a mobile app.

Healium has had tens of thousands of data downloads, and its experiences have been viewed more than 7 million times. The company’s partners and users include Google, the American Red Cross, Boys & Girls Clubs of America, Inova, the University of Missouri and others. George Washington University and Inova are among its several research partners.