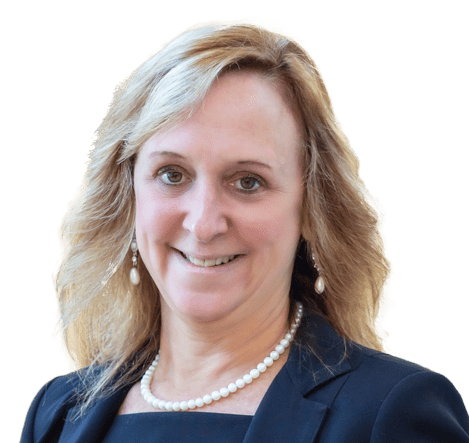 Carey Smith was introduced to engineering by her father, and after visiting a career fair, excelling in math and getting her start at IBM, she not only made a living supporting the defense and intelligence sectors through engineering, but rose to the executive ranks to do so.

Smith is the president and chief operating officer at Parsons Corp., where she has been since November 2016. She’s responsible for the company’s global profit and loss spanning its Federal Solutions and Critical Infrastructure segments, product management and operations support functions.

But her true beginnings were in engineering.

Growing up in Alliance, Ohio, Smith’s father was an engineering and sales executive for longstanding domestic manufacturer Morgan Engineering, and he always wanted his three children to become engineers.

When Smith was in junior high school, Morgan Engineering held a career day, so she and nine students went to hear about the company’s work.

She was the only female student attending, Smith told WashingtonExec, “but I would say after that point in time, I decided that’s the work I was going to do.”

Smith was always strong at math, so electrical engineering was a natural draw for her. She graduated from Ohio Northern University in 1985 with a bachelor’s degree in electrical engineering and began working as a systems engineer for IBM Federal Systems that May — in a way, making a childhood dream come true.

Opening the Door at IBM

“Surprisingly, I wanted to work for IBM since I was in kindergarten or first grade,” Smith said. “I always viewed them as the strongest company and the best in the industry of what they did.”

Smith didn’t necessarily target the defense or federal business of IBM — she just wanted in. IBM had a hiring freeze the year she graduated, but she still sent her resume, and it caught someone’s attention.

“There was only one site hiring at IBM; it was Owego, New York, which supported special operations,” Smith explained. That’s where her resume went — and that’s how she landed an offer.

A systems engineer position was perfect for her at the time.

“That’s where you bring together design, development, integration, test and management of systems across the entire life cycle,” Smith said. “So, you’re basically ensuring that a problem is holistically solved.”

She specialized in avionic system engineering, software development and integration and test, and was exposed to a very broad engineering experience.

“I got to do a lot of different things,” she added, including participating in an onsite master’s degree program.

While she was working for IBM, members of Syracuse University’s Master of Science in Electrical Engineering program would come twice a week and teach onsite, allowing employees to get their degree while they were working.

Smith took full advantage of that, getting her master’s degree in electrical engineering from Syracuse University shortly after completing her undergrad and starting her career.

From 1992–1993, Smith was a business development manager for systems integration with IBM Federal Systems, and in 1994, the segment was acquired by Loral Corp., a New York-based defense firm. From 1993–1995, Smith served as a senior program and engineering manager for the merged team. In 1996, Loral was sold to Lockheed Martin, where Smith would spend the next 15 years of her career.

“It was a great opportunity to get broad experience,” Smith said. In those 26 years, she had a part in systems engineering, engineering management, program management, business development, strategic planning, advanced technology and research and development, operations and manufacturing.

“I pretty much touched every category when you look at what a general manager needs to have as background,” Smith said. She also worked in multiple industries, predominantly supporting government and federal civilian, and held global roles that took her across the world.

But specifically, that early role as a flight test engineer was a pivotal moment in her career, steering her in the direction of defense for years to come. She was one of the first women flight test engineers and flew with the U.S. Special Operations Command. She worked on several defense special operations aircraft and combat helicopters, including the MH-53J, MH-60K, MH-47E and MC-130H.

“When you have that type of experience and you’re up there seeing them use what you’ve designed, and seeing the true mission effectiveness, you get hooked,” Smith said. “At that point, I always wanted to support the warfighter from then on, for the rest of my career.”

In September 2011, Smith was recruited to lead Honeywell Technology Solutions Inc. as president.

“That was a promotion for me, so I took that opportunity,” she said.

Smith served in that position until 2015, when she was promoted to run Honeywell’s customer and product support for the $16 billion revenue aerospace business.

“It was my first real exposure to commercial aerospace business,” Smith said. “In addition to defense and space, I oversaw business & general aviation and air transport and regional.”

But that position was in Phoenix, Arizona, where Honeywell wanted her to move, and Smith’s family remained in the Washington, D.C., area. After 18 months in the job, that’s when she got the call from Parsons.

“I thought Parsons had the opportunity to come in and transform a business and shape a company that I felt had a lot of great technological capabilities, but really needed a growth strategy and an execution implementation to achieve financial results,” Smith said. Plus, the company is in Centreville, Virginia.

Smith started as the president of Parsons’ Federal Group in 2016, rising to COO in 2018 and adding president to her title in 2019.

And in between professional strides, Smith’s achievements were recognized in 2018 when she received a call from Ohio Northern University President Daniel DiBiasio. He had requested she deliver the commencement address and receive an honorary doctorate in engineering.

“I was, as you can imagine, quite thrilled,” she said. “It was one of my career highlights.”

Leading with the Right Foundation

As a general manager, it’s important to have a broad background to understand different areas and ask the smart questions, Smith said.

“You need to be a good listener and come to a decision at the end of the day,” she said. “But the important thing is making sure you’re asking the right questions to drive those decisions.” That takes a balance of having the business and technical acumen to be in that type of decision-making position. There’s also a need for acquisition experience, which Smith said she got from acquiring companies at Lockheed Martin, Honeywell and Parsons.

And she credits being a well-rounded leader to taking as many different assignments as possible and to having trusted mentors.

“I was never afraid to go into a new area and develop and learn, even if I didn’t know it. You don’t have to be an expert,” she said. “You just have to ask the right questions.”

Working globally and having both defense and commercial experience have been crucial to shaping her into the leader she is today, Smith said.

She approaches innovation with her customers through continuous customer engagement. Smith meets with customers regularly to listen to and understand their problems to make sure Parsons’ research and development efforts are aligned with the customer’s emerging needs.

It’s in the Family

When she’s not working, Smith is guided in her personal life by her husband and three kids.

Though she was the only one of her siblings to become an engineer, she’s passing on the family tradition. Her children have all gone into the technology area; one works for Google, one is a recent computer science graduate from the Georgia Institute of Technology, and her third is also going into IT at Virginia Tech. Plus, Smith’s husband is an engineer by background.

When they’re not all being techies, Smith said they love to travel as a family. Smith has been to more than 50 countries and plans to expand her list in the future.

But on her own, Smith’s biggest side passion is country music, after being turned onto the genre during a Johnny Cash concert in her 20s. She even used to do — and teach — country line dancing, is an avid attendee of the Country Music Association Festival and is big on Nashville, Tennessee.

And before Smith and her husband retire to split their time in their house under construction in Aruba, she has many, many more years in industry and with Parsons, potentially joining public company boards and getting more active in the community.

But first and foremost, “making sure Parsons succeeds as a public company and delivers for our customers, our employees and our stakeholders, is my immediate focus,” Smith said.