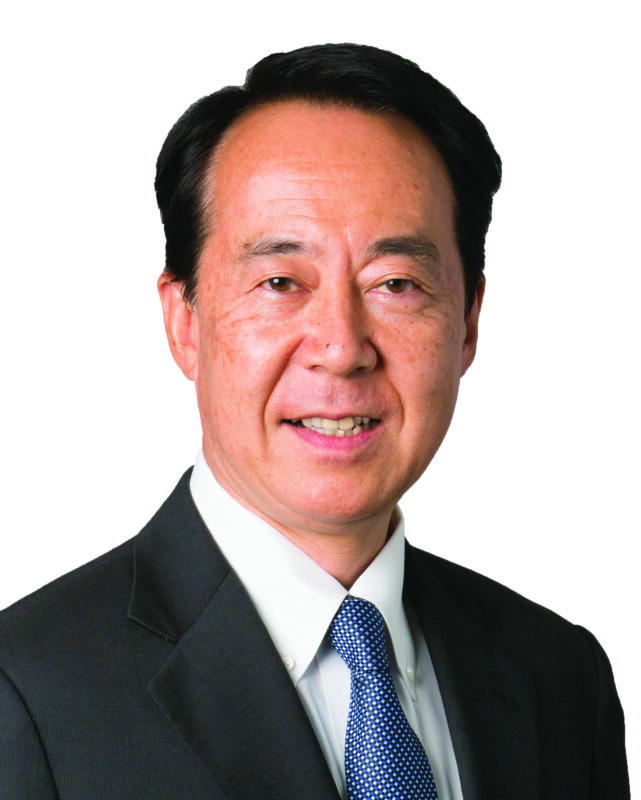 Shin Takahashi, chairman of the board and head of government relations at NECAM

When Nobuo Takahashi lost his family in Hiroshima during World War II, he instilled in his children a passion to explore opportunities outside of Japan. For his son, Shin, that action took him eventually to the U.S.

Shinsuke “Shin” Takahashi is the chairman of the board and head of government relations at NEC Corp. of America, a position he’s had since November 2017 at a company he originally joined in the 1980s, as NEC Corp.’s headquarters are in Tokyo. But Shin’s experiences in the U.S. and with the English language started long before his professional career.

Nobuo left his hometown of Hiroshima to train to be a Kamikaze pilot during WWII. But during his training, the U.S. detonated an atomic bomb over the city Aug. 6, 1945.

“He had no idea what the bomb meant. He went back to his home, and there was nothing there, everything’s flat,” Shin said. All Nobuo found was a teapot his mother had used every day.

That experience made Nobuo push Shin to think beyond Japan. Japan has always been the greatest country in the world to Shin and his family — it’s where he grew up, after all. But this event completely changed Nobuo’s perspective.

“I think that was a shock for him, that what a huge mistake that Japan made to get into the war with someone that has that technology,” Shin said. “I think that made him think, ‘We cannot just sit here.’”

Then, Shin attended the Sophia University in Tokyo from 1976-1981, where he studied English and international relations. In 1978, he enrolled in a year-long foreign exchange program at the University of Wisconsin-Eau Claire. This was his first experience in the U.S.

Learning international relations and taking a year to study in the U.S. was natural for Shin, considering his English-speaking upbringing and mindset instilled in him by his father.

In 1979, Shin returned to finish his degree in Tokyo, but his foreign exchange experience made him want a career that would allow him to once again leave Japan.

Shin wanted to get involved with an international business. NEC, a Japanese IT and electronics company, was looking to expand its global market and hiring ambitious college graduates in the 1980s. Shin applied, was hired and eventually assigned to the U.S. business unit working with exports.

And in 1988, Shin was reassigned to NEC’s telecommunication infrastructure business in Herndon, Virginia — his first experience living and working in the U.S. He still worked with exports for NEC’s U.S. market, traveling between the U.S. and Japan. In fact, he spent seven years in Herndon, went back to Tokyo, spent another four years in Herndon and returned to Tokyo. This cycle sent Shin into the 2000s.

In 2005, Shin transferred to an NEC affiliate company, Japan Aviation Electronics, which makes electronic parts and connectors and is in Orange County, California. He spent more than seven years there, eventually as president and CEO of JAE’s U.S. operation.

Then, in January 2013, Shin was invited back to NEC to run its U.S. operations as president and CEO in Irving, Texas, just outside Dallas.

So, by moving from California to Texas — along with being the only “cheesehead” Green Bay Packers football fan in a room of Dallas Cowboys fans thanks to his Wisconsin days — Shin had a bone to pick with Dallas.

“When I moved from California to Texas, I couldn’t find any ramen. I was shocked. I could get that in California easily,” Shin said.

So, when Toyota was deciding to move its California headquarters to the Dallas area, Shin became a big supporter, thinking it could help spark a momentum of Japanese businesses in the area. It was important to Shin the Japanese in the area had a cultural belonging, including enough teachers for the Japanese-language supplementary school so children of incoming families could keep up with the Japanese school system.

In fact, Shin was recognized for these efforts by the Dallas Morning News. Economic development leaders in the area said Shin’s arrival played a crucial role in attracting 80-some Japanese firms to Dallas-Fort Worth. And eventually, leading to 20-some ramen restaurants.

In 2017, Shin passed along his CEO position to another Tokyo native and moved to the Washington, D.C.-metro area to jumpstart NECAM’s government relations function — something the company didn’t have yet.

The office, now in Arlington, Virginia, was used for its biometrics business for business development and sales, and as NECAM chairman of the board, Shin took charge of hiring and creating its government relations unit.

Taking NECAM to the Hill

NECAM had been successful with selling its biometrics technologies to local and state law enforcement and government, but it wanted to expand its business federally.

When NECAM brought its government relations to Arlington, NEC was already providing its technology to the Department of Homeland Security’s Customs and Border Protection. CBP installed NEC’s facial recognition technology at 17 airports. The tech scans faces to ensure they match a traveler’s passport information.

And while that, too, has been successful, NECAM wanted to get further involved in the government’s appropriation process set by Congress.

Shin said NECAM’s salespeople are great at selling to government agencies. But when the company has technologies not yet budgeted for, it has to go through Congress’ appropriation process to get those funded. The process is different in Japan, as each government agency handles its own budget.

“We thought that for us to grow this business that we’re doing, we need to get in front of the appropriation process,” Shin said.

“That’s another part of the need to work with Congress, that we wanted to make sure those discussions are balanced discussion,” Shin said, meaning a balance between the technology benefit and privacy concerns.

So, Shin’s unit works to keep relevant on those discussions while ensuring its technology has accurate, up-to-date biometrics data.

And lastly, because NEC is a global technology company, the government relations unit must comprehend the U.S.-China technology supply chain, relevant concerns on export control matters and its impact on business and investment.

“Those are important matters that we have to fully understand what’s being discussed in Congress, and then that will be reflected in our global strategy,” Shin said.

And he’s proud of having been a part of forming the government relations unit. When Shin was CEO, he worked with the management team to decide it wanted to expand its federal government business, and it did.

“Now, we can have 60 employees here. We’re building a showroom so we can show all the government agency people, the congresspeople, our technology and how it’s used,” Shin said.

Leading with a Vision

As a leader, Shin makes sure there is a clear vision as to why his organization does the business it does.

Regardless of a person’s position in the company, from business development to accounting or legal, understanding the impact of the company draws different levels of passion.

And the same goes for the IT industry — if employees can see how the products they build contribute to society and how they can change citizens’ lives, it can be inspiring.

“I think all you need to do is show the castle and explain how what you’re doing leads to that. Then, I think people will have their own motivation and then that will drive their daily work,” Shin said.

“That’s the most important thing. Most of my job was spent on that, to make sure all the employees to any kind of organization see that,” he added.

Now, in the D.C.-area, Shin lives in Arlington with his wife and continues to promote the Japanese culture.

“I like to use this as a big stimulation for all the Japanese community, the pride,” Shin said.

Having a Japanese basketball player drafted to a local U.S. city’s NBA team, or welcoming notable good ramen restaurants, stir momentum for the Japanese community to expand in the area — and Shin is a big proponent of that.

And it doesn’t hurt that Shin loves sports. He’s a big Washington Nationals fan and enjoys watching baseball, as he played when he was a kid. He also vows to watch the Wizard games now, especially with Hachimura on board.

“I love watching and cheering sports because, particularly here, D.C., there’s always a political divide, but when you go to the stadium, it’s all Nats fans. I love the feeling,” Shin said. But he won’t compromise on football — a Packers fan he remains.

Shin also loves to be in nature, whether it’s bicycling, gardening or just being outside. He loves music, too; specifically, live blues music, something he picked up during his time in Texas.

And after he retires, Shin plans to follow his international mindset and travel, but also to continue his involvement in the industry somehow.

“I think I have a unique career of being a Japanese business guy who did run the company and also get involved in policy matters. I think in today’s world, you can get connected with anyone,” he said. One day, he might share his expertise and ideas in a book or through consulting, he said.

And he’ll most likely continue to call the U.S. home, as his grown kids are in stateside, too. But he’s still on the lookout for a good live blues bar in the area.