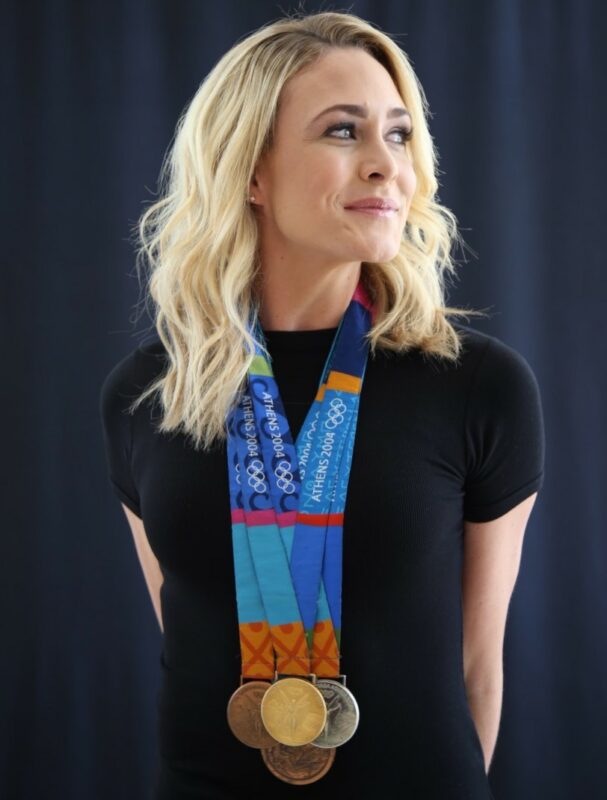 With former Olympic gold medalist swimmer Kaitlin Sandeno at the helm of the DC Trident, the International Swimming League team is set for another meet this weekend.

The league is a first of its kind international league of elite-level swimmers and is in its inaugural season. The American Derby meet will be Nov. 16 and 17 in College Park, Maryland. All four U.S. teams — DC Trident, New York Breakers, Los Angeles Current, and Cali Condors — will compete.

“Everybody is really, really excited and really looking forward to the D.C. meet,” Sandeno said. “The first two meets (of the season) were extremely exciting. I feel like not a lot of people knew what to expect because it was the first. And I think a lot of expectations were blown away, and the excitement and the level of show that they put on was just truly unique and different.”

The ISL has brought together individuals from many different countries and backgrounds. Some are quiet, some outgoing. Some are rookies, some veterans. Many have competed in the Olympics and other elite competitions.

“I felt like history was truly made when this league kicked off a few weeks ago,” Sandeno said. 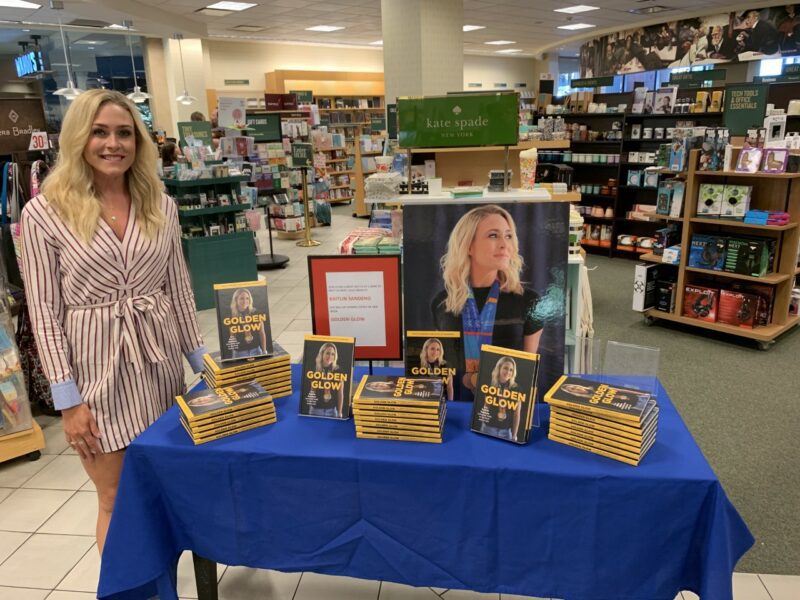 Sandeno with a bookstore display of her book, “Golden Glow.”

GM of the DC Trident

Sandeno said the ISL was first brought to her attention through an old teammate.

“He threw it out to me that they were looking for another (general manager), and thought I would be a good match and wanted to see if I was interested,” she said. “That led to a meeting in Mission Viejo when some of the ISL global people were in town, and things just progressed from there.”

Sandeno said she was drawn to the potential to grow the sport of swimming with new opportunities for athletes. She accepted the position in February.

“I’m just really honored and really humbled to be in this position leading what I think is the future of our sport,” she said. “There are eight great teams in this league, but we want to be somebody that does things a little bit differently.”

The DC Trident has an all female coaching staff, and athletes are paid the same across the board. The team also makes a point to be completely transparent about sponsorships and revenue and to have athletes benefit financially from its success.

Sandeno said she’s excited to have a league rallying around the idea of swimming as a team event as opposed to focusing solely on individual accomplishments. She also works to set an example as a role model, something she expects of everyone on the DC Trident.

“For DC Trident, I want not only great swimmers, but we want awesome human beings and great role models, and somebody the athletes for the next generation can look up to,” she said. “As a GM, I am trying to set that precedent and let your actions speak louder than your words, and just trying to lead with a lot of enthusiasm and excitement and support and just want to rally around our swimmers.”

Sandeno remains one of the few female general managers in professional sports, which she said is both a huge honor and also speaks to the fact there is a long way to go. Still, it opens doors and is inspiring other women, she added.

“A lot of people are saying, ‘It’s about time,’” she said. “And I think it shows to the league that having the gender equality makes sense in a sport that’s co-ed as well. Even so, just because you’re a female doesn’t mean you can’t coach men, and vice versa. I think we’re truly breaking some glass ceilings. I’m honored and I’m thrilled at the same time. I’m hoping that this sets a new precedent.”

Sandeno also believes those in the spotlight have a responsibility to be good role models.

“That was something that I always took very seriously and started giving back to the community at a very young age,” she said.

Achieving at a certain level gives one a platform, and it’s up to each individual to choose how to use his or her platform, she said. Sandeno has chosen to focus much of her attention on the Jesse Rees Foundation.

“That was the first and only foundation to this day that I feel like I have really put all my heart and soul and energy into,” she said. “I’ve done over 180 hospital visits with them, inspiring children fighting cancer to never give up.”

The foundation supports pediatric cancer patients and their families. Jesse Rees was a junior Olympic swimmer in a city near where Sandeno lived several years ago, and the tight-knit swimming community came together to support her after she was diagnosed with two inoperable brain tumors. Sandeno went on to find her niche in the organization.

“Not a lot of people are comfortable going into the oncology floors and visiting with sick children, but for me, I felt like I was shaped for it,” she said. “I think my swimming shaped me for it, because I think being an elite athlete, you develop kind of a thick exterior, but I’ve always had a very compassionate heart. I come from a very compassionate and passionate family, a loving family, and my parents have always been more worried about me being a nice girl than being a good athlete.”

One of the foundation’s taglines is “We will care until there is a cure.”

“There are a lot of amazing fundraisers and nonprofits out there that are trying to raise money to find a cure, but we want to care on these kids while they’re trying to find the cure,” Sandeno said. “We’re really unique in the sense that the majority of our money goes straight to caring on the families.”

Sandeno said she loves sports in general and has always been a very competitive person.

“When it comes down to swimming, I do believe I was born with a certain God-given talent,” she said. “I was told I have a very precise feel for the water, and a technique that I was able to correct once it was pointed out to me what needed to be fixed. And I just worked really hard and great things happened.”

“Anytime I got to put on a swim cap with USA and my last name on it, it was extremely humbling, and it’s such an honor and a privilege,” Sandeno said. “And it’s something that I don’t take lightly. At the same time, it’s a very surreal moment, and it almost happens too quickly. It wasn’t until after a few years when I had finally hung up the suit and the cap and the goggles, where I think it really soaked in what I truly had accomplished.”

For Sandeno, being in the water is therapeutic. It provides a sense of peace even when the workouts are intense, and it has helped her develop qualities of self-discipline, dedication and hard work.

Even from a young age, Sandeno was always involved in more than just swimming and school, and she said her ability to stay organized and manage time well were assets that allowed her to make the most of her talents. In school, she was class president, on the yearbook staff and various clubs.

It wasn’t always fun and games though.

Between 2000 and 2004, Sandeno faced multiple shoulder injuries, a back injury and an ongoing battle with asthma. She was in a car wreck, found herself gaining weight her freshman year of college, and was in a battle with her own burnout.

“It was literally one thing after another,” she said. 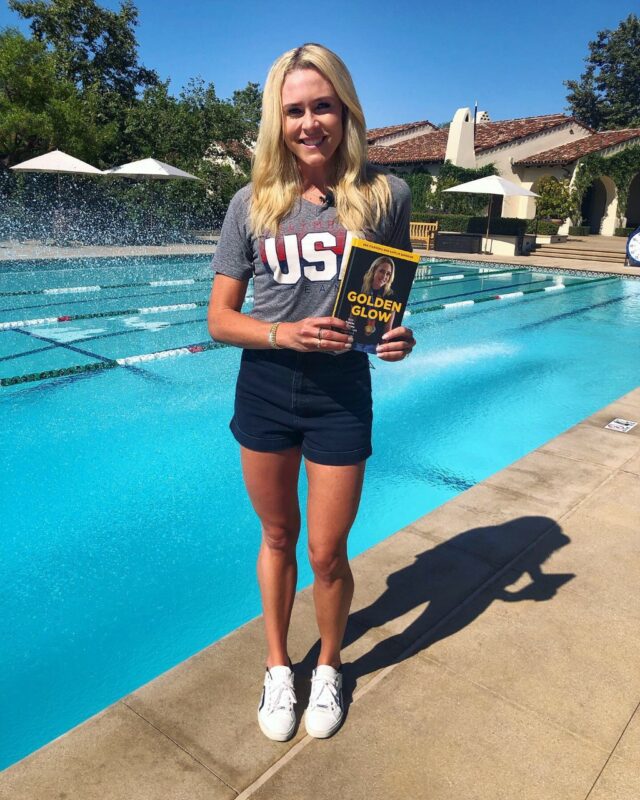 Sandeno with her book, “Golden Glow.”

She had already been to one Olympics. Perhaps two were not in the cards for her. It’s a subject she delves into in more depth in her new book, “Golden Glow.” Surrounded by the right people, Sandeno set goals for herself and kept up the positive self talk before going on to compete in the 2004 Olympics and setting a new record.

“I think it’s your mental game, and I did suffer mentally between 2000 and 2004 because that’s when self-doubt started creeping into my mind,” she added. “It was a physical thing that I had to get over with all my injuries and illnesses, but then the mental side, I needed to regain my strength (there) as well.”

Now, Sandeno is competing on a different level, and swimming continues to be an integral part of who she is.