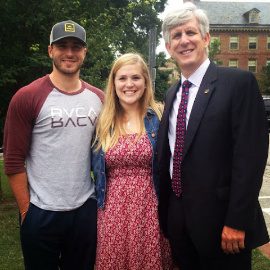 Todd, Caroline and Zac Stottlemyer have at least two unusual things in common —they’re all left-handed and they all worked in government contracting.

CNSI CEO Todd Stottlemyer said he wasn’t surprised two of his children, Caroline and Zac, have both worked in the government technology space, just as he has done.

“They are both very interested in business, technology and government,” said the CEO of the health IT solutions firm. “The government technology space is an opportunity to combine all three interests.”

Prior to CNSI, Todd was CEO of Inova Health System’s Center for Personalized Health. His resume includes serving as CEO of Acentia; president, CEO and board member of the National Federation of Independent Business; founder, CEO and board member of IT company Apogen Technologies; president of McGuireWoods Consulting; managing director of McGuireWoods Capital Group; and executive vice president and chief financial and administrator of BTG Inc.

He holds a law degree from Georgetown University, and, like Caroline, an undergraduate degree in government from the College of William and Mary.

Zac studied political science at Christopher Newport University, was the head coach of a local Newport News JV baseball team, interned for Congressman Frank Wolf and was political director on Congresswoman Barbara Comstock’s campaign until the election in 2016. He went on to at Gartner, IronArch Technology and national security tech company Zachary Piper Solutions. He recently moved to Pensacola, Florida, to work as director of business development and capture management for OneSource PCS. He and his wife, Lexi, are expecting their first child this summer. 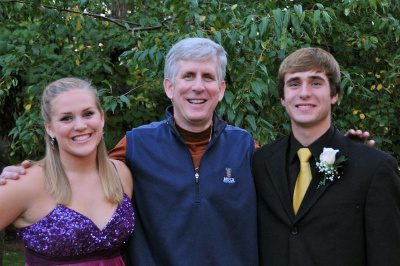 Caroline recently accepted a position as a senior associate in the information security office at Capital One. Previously, she worked as a cybersecurity analyst at Jacobs. As a high school senior at Flint Hill School, she completed a month-long internship for then-Virginia House of Delegates Rep. Dave Albo.

That experience influenced her decision to major in government in college. She went on to enjoy a stint working for Virginia politician Tommy Norment and had a summer internship working for former Congressman Frank Wolf.

“All of these internships provided me with so much insight into government and politics,” she said. “I knew after a brief stint in Madrid that I would come back to the D.C. area since all of my family is here. The area is definitely conducive to working in government contracting.”

Caroline agreed she and her father have similar business and educational interests.

“We both went to William and Mary and both majored in government, and even had some of the same professors,” she said.

Yet, she didn’t plan to pursue a government-related career until high school when her interests shifted from teaching.

“I loved attending events with my dad and having the opportunity to talk about business and politics with his friends,” she said. 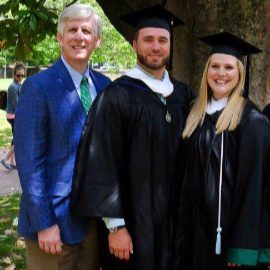 Caroline said she and her father are both very outgoing and talkative people and both are “incredibly passionate, whether it be work related or not.”

“We both value family time and friendships and know the importance of making time for those relationships,” she said. “We love to attend sporting events, read books, and travel. When I was living in Spain, he was able to meet me in Austria, and we went skiing in St. Anton, which was one of the coolest trips we have been on.”

As a child, Zac, who is older, enjoyed baseball, basketball and golf.

“Today, Zac has a low single-digit golf handicap — and is a lot better than me!” Todd said. “Caroline was also very interested in sports, lacrosse in particular, and did competitive dance through high school. Caroline was then and continues to this day to be an avid reader. She is also fluent in Spanish.”

Caroline and Zac are very close in age and were always in school together. Even in high school, they had many of the same friends and started hanging out more frequently.

“We attended different colleges, but CNU and William and Mary are super close to each other, so we still had the chance to see each other frequently,” Caroline said. “Once I moved back from Spain, I moved downtown and we were only a few miles away from each other, so we were able to spend a lot of time together. Now, he and his wife, Lexi, are in Florida, but I’m sure I will still see them frequently.”

Caroline said she and Zac are similar in that they both admire their parents and strive to be more like them.

“Both of them are such incredible, driven people, and I only hope to resemble them in some way as I continue to grow personally and professionally,” Caroline said. “We also enjoy spending time with our extended family — and all of our dogs!”

Zac tends to be a little more introverted and Caroline more extroverted, she said.

The family continues seeing one another frequently.

“We’ll go home on the weekends, or my parents will come meet us downtown for lunch/dinner,” Caroline said. “We have two younger siblings who are both in college, so we spend a lot of time at my parents’ house when they’re home. We also attend Nats games regularly when they’re in season.”

Caroline said she is passionate about advocating for women in STEM positions. She is currently pursuing a master of engineering in cybersecurity at George Washington University. In her spare time, she enjoys traveling, attending any type of sporting event as well as spending time with her friends and boyfriend.

She traveled abroad twice in college and spent a year in Spain teaching after graduation.

Like Caroline, Zac also became involved in politics, this time by working on political campaigns. Even as a younger child, he was aware of the effect government and politics have on one’s everyday life.

“Obviously, being around my father growing up has had some influence in regards to the industry I have chosen to work in, but one of the best things about my father is that he wanted us to do whatever made us happy, and he never pressured us into doing anything that we did not want to do or anything that made us unhappy,” Zac said. “I am not sure what the future holds in store for me, but working in government has always been an interest of mine down the road.”

Zac and Todd both enjoy sporting events and spending time with family. They also both love winter sports, such as skiing, and have taken many trips together.

“I believe my father is extremely passionate, kind, respectful and loving,” Zac said. “I strive to be like that every day, and he has set the best example for myself and my siblings of what that looks like.”

Zac jokes that a major difference between he and his father is that his father has better hair.

Zac said hs is impressed with his sister’s passion and achievements.

“She is also so kind and loving, and I look up to her even though she is younger,” he said. “She has done amazing things career-wise in such a short period of time, and she is an inspiration to me.”

“She is so organized and detail oriented that I need to take classes or lessons from her!” Zac said.

The family continues getting together frequently for dinner, pool days, vacation and just hanging out.

Zac said he has many professional goals he wants to achieve, but first and foremost, he wants to be the best father, husband, son and sibling he can be.

“Professionally, I strive to help others, whether that be through supporting the government, men and women who serve, or helping find new technologies that can make a difference in the world,” he said. “At the end of the day, I just want to help others in the work that I do.”

To that end, both Caroline and Zac are working toward advice Todd said he always gave them growing up:

“Find your passion, work hard, be a lifelong learner, stretch yourself, don’t be afraid to fail, make a difference in everything you do, be a great teammate, and really enjoy what you do.”

Caroline and Zac have two younger siblings. Rachel recently graduated from Virginia Tech and is now working at Cvent, and Matt is a rising junior at William and Mary.