An introduction to the right person can make all the difference. Pamela Sorensen knows this, she knows the movers and shakers, and she has launched a business capitalizing on one of the things she does best: highly curated introductions.

Her business, High Frequency Consulting, has already been put into motion and is in the midst of expanding.

“I’ve always been a natural connector,” said Sorensen, the former author of the Pamela’s Punch blog. “I see the world in patterns of clusters. People, ideas, places, functions, conversations, moments — past, present and possibly the future. That’s just how my brain works. I also have accepted that knowing who individual persons really are and what makes them vibrate at a high frequency vs. operating at a low level really drives me.”

Sorensen has lived in the D.C. area since 1994 when she graduated from Penn State. For more than a decade, she made a living in sales and business development while expanding her passion for charity work. Then the entrepreneurial bug bit her, and she spent the next 10 years of her life covering Washington, D.C.’s elite social, professional and philanthropic scene through Pamela’s Punch. In 2017, she accepted a corporate position that allowed her to stretch her legs and find a new direction. Now, she’s set out on her own again.

Those introductions can take place one-on-one or through small groups — eight people in a private dining room, for instance, or a select few touring a local winery. Spending time with people in a different role than what they do in their everyday jobs is a way to truly get to know them, she said.

“They hire me to be a super connector for them and lead generator and I offer them very highly curated connections and strategic introductions,” she said. “I get you to the 10-yard line, but it’s up to you to get into the endzone.”

With connections in multiple industries — including government contracting — as well as the philanthropic scene, Sorensen’s foothold in D.C. culture has long been recognized. She has been interviewed several times on Fox News Channel as someone who had her finger on the pulse of what was happening at parties and galas around town, including after President Obama’s first inauguration. She has also appeared on Planet Green’s “Emeril Green” show in 2009 and has interviewed numerous celebrities and household names throughout her career. 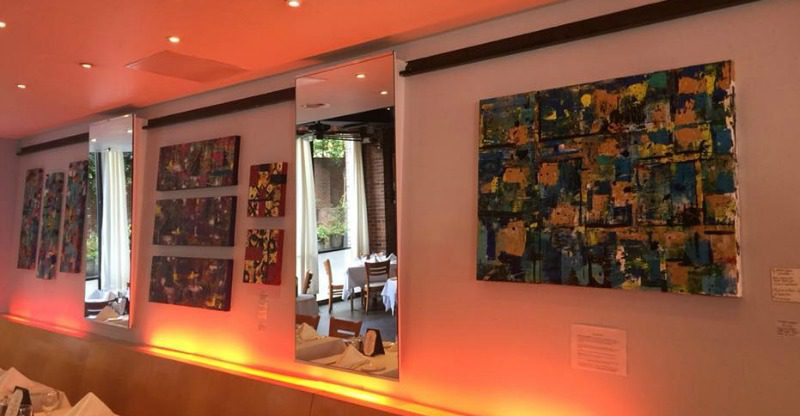 In addition to launching High Frequency Consulting, Sorensen has rediscovered her love of painting and is putting her talents to work.

It began when she moved into a new apartment over the summer and was contemplating how to decorate the tall, white walls. A friend suggested that rather than purchase art, she create her own.

“I have been painting and drawing since I was a child,” Sorensen said. “This is a way that I can create and just produce and also just be in touch with that creative energy that is within me that just needs to get out.”

So, Sorensen began creating, first landscapes, then more abstract impressionism. She produced so much that not only was she able to decorate her own home, she also began selling her work as well as receiving commissions. For a month, there were several paintings on display and for sale at Peacock Cafe in Georgetown. Up to 10 percent of the proceeds went to locally-based charity Pivotal Moments 501c3, founded by former MorganFranklin CEO Bob Morgan, she said.

Sorensen said she has known WashingtonExec CEO JD Kathuria for over a decade and admires the work his company is doing.

Born in Seoul, South Korea, Sorensen was adopted when she was 4 months old. Her family moved around the country because of her father’s role as a Presbyterian minister and finally landed in Fairfax, Virginia, in 1990. She went on to attend Penn State University, graduating in 1994 with a bachelor of arts in speech communications. In 2002, she was on the cover of Washingtonian magazine’s 25 Most Beautiful People issue, a list that highlighted intelligent, talented individuals changing the face of Washington.

She lives with her rescue hound mix Frasier Simone.

How Higher-Ed Investments and Business Partnerships Could Transform Virginia