You are at:Home»News»2018 Pinnacle Awards: EA of the Year Stephanie Crawford with MAXIMUS Federal 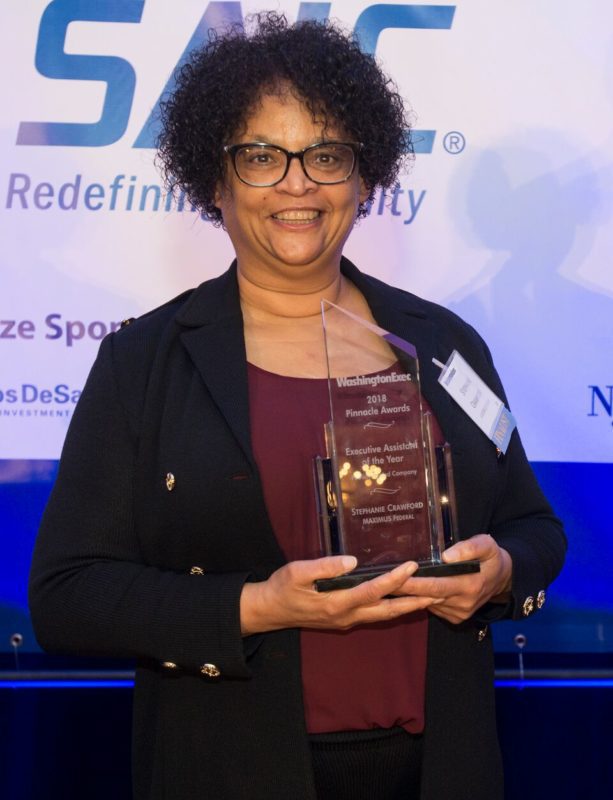 Stephanie Crawford’s official job title is executive assistant to Tom Romeo, president and general manager of MAXIMUS Federal. But executives at the company think of her more as an assistant in executing all areas of the company’s business.

“She is a steady force in a fast-paced environment and works above and beyond every day to make everyone else’s job easier,” one executive says. “For her, no task is too big or too small. She is always willing to help at a moment’s notice and demonstrates a can-do attitude that is contagious.”

For her achievements, Crawford was awarded the EA of the Year Award at the inaugural Pinnacle Awards, recognizing leaders and influencers in the GovCon space.

In her nomination for the award, executives said Crawford, a long-time company employee, works hard to promote the next generation of leaders and instills a spirit of inclusion for all.

“She is both an advocate and champion for our team, always looking to find new opportunities to utilize team members’ talents and natural gifts,” according to her nomination.

“She has long been a champion for inclusivity and she has taken on a personal mission to ensure everyone feels that they matter and are part of the team,” according to her nomination. “Since many of the employees are located at sites all over the country, it can be a challenge to ensure that they feel like part of the bigger mission, but Stephanie has taken real action to increase the feeling of unity.”