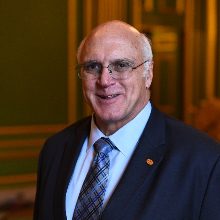 A 27-year Navy veteran, Gardner previously commanded the USS San Juan (SSN 751) before going on to become the deputy for science and technology to the chief of naval research. He oversaw the Navy’s Deep Submergence Program and Advanced Technology Program. He has previously served as CTO for Jacobs Engineering, Scitor and ManTech International.

An ASME Fellow and professional engineer, Gardner chairs the ASME Industrial Advisory Board and is an adjunct faculty of the Blockchain Research Institute. He holds degrees from the United States Naval Academy, Harvard University and MIT as well as a doctorate in energy economics from George Washington University.

Why Watch: Gardner is keeping a watch on all three business segments at HP Federal: personal systems, printing and 3D printing and the cybersecurity ramifications of each.

“When most people think of cyber, they think computers, and really, any endpoint on a network, whether it’s a printer, or a 3D printer or a tablet — they’re all vulnerable for attack vectors from an adversary in cyber,” he said.

HP Federal’s approach combines security for both software and hardware as well as the human factor and insider threats.

“(Many people) don’t think of addressing security for the printer in the same way that they would for the computer or the mobile device,” Gardner said. “If you look at all the 3D manufacturers, how many of them provide cyber protections for things like file integrity or the operations of the machine? I don’t know anybody other than HP Federal looking into this.”

Gardner is in a unique position to engage with federal clients on the firmware resiliency guidelines the National Institute of Standards and Technology published with support from HP Federal. The company’s line of protective technologies isolate web activity away from a device’s main operating system as a way to defend against attacks.

“(HP Federal has) a Sure Click capability in today’s computer — it’s on my computer today — that if I click a link in an email or of I go to a website, it brings it up in a virtual machine so that any malfeasance being done within coding of the site is going to be maintained within that virtual machine,” Gardner said.

See the full list of Top 10 Cyber Execs to Watch.