You are at:Home»Execs to Know»Altamira Continues Expanding Footprint Outside the Beltway 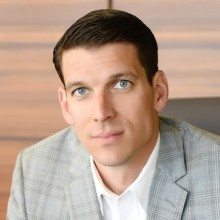 “We’re thrilled and honored to be part of the fabric here in the community,” Moneymaker told DBJ.

Altamira’s opening of a larger office in Fairborn was to facilitate new work with the Pentagon, Moneymaker added.

Some of that recent work includes a 5-year, $25 million contract with the Air Force Research Laboratory. The $24.6 million Distributed Radio Frequency Sensing contract is to provide ARL with next-gen radio frequency sensing technologies through R&D of radio-frequency systems and sub-systems.

Altamira Vice President Blaine Worthington told DBJ other deals, such as one with a ceiling of $950 million and a recent one worth up to $960 million with the National Geospatial-Intelligence Agency, have been “[t]he biggest driver to our success.”

The past years have seen the company’s annual revenue grow by double digits, a feat that led to Moneymaker’s promotion from chief strategy officer to president.

But 2018 will be especially significant.

“This will be the best year in company history,” Moneymaker told DBJ.