The overall economy and the number of industry mergers and acquisitions appear to be on an upward trend, according to a survey of major dealmakers in aerospace, defense and government services.

“Across all the sectors we surveyed, most respondents were optimistic that anticipated M&A activity levels would be up 5 percent or more,” said Bob Kipps, managing director, of KippsDeSanto, which conducted the survey. “This confidence level for the aerospace, defense and government services sectors is resulting, in part, from last year’s tax law changes, ongoing economic confidence, and an improved U.S. defense budget picture.”

The report is based on surveys of 168 dealmakers interested in aerospace, defense and government services. Those surveyed include both strategic buyers and leading private equity groups. This is the first such report from KippsDeSanto, an investment banking firm focused on M&A and finance expertise. 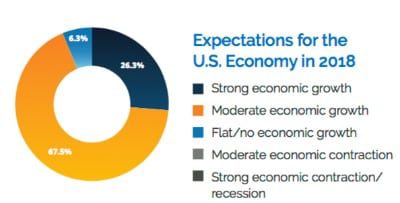 Additionally, those surveyed believed the aerospace sector’s three-year trend of reduced activity levels is stabilizing and perhaps even increasing this year. More than half predicted aerospace deals will increase by at least 5 percent, while the other half expected them to remain the same.

“Across all sectors, almost half of survey respondents think valuations will be up from 2017,” said Managing Director Kevin DeSanto. “Plus, it’s evident that the primary goal that drives M&A strategy continues to be the addition of new capabilities, products or technologies. Almost half of the leaders surveyed agreed, with another third ranking the adding of new customers as their top priority.”