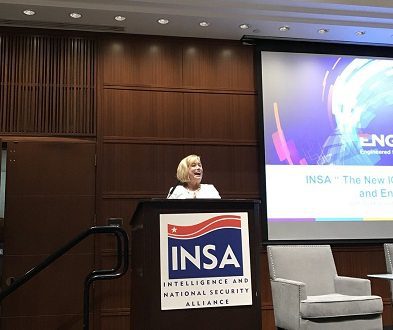 Engility chair and CEO Lynn Dugle spoke about the need to empower women within the intelligence community at a recent forum hosted by the Intelligence and National Security Alliance.

Dugle delivered a keynote address at INSA’s May 17 symposium, “The New IC: Empowering Women and Engaging Men.” Dugle said men and women both need to do better to create good workplaces for women, and she pledged to re-dedicate herself to three things she had “fumbled” over the course of her career: having the courage and patience to communicate and explain gender-related challenges; separating stereotypes from real differences; and not telling herself she couldn’t handle new opportunities.

Dugle said she regretted turning down opportunities and responsibilities because she didn’t feel as confident in the workplace as she should have.

“I don’t know if I had imposter syndrome, but I had a bad habit of telling myself, telling others ‘no,'”  Dugle said.

Dugle told a story about being recommended as a candidate for president of Raytheon’s intelligence business, saying her first instinct was to offer someone else up as a candidate, and then someone else. A friend later chastised her for retelling that story as a joke, and not seeing how she’d let herself down by not pursuing the opportunity more seriously, Dugle said.

“It never struck me how backwards that was until I shared that story as a joke, and one of my best friends said, ‘You’re not only a moron’ — and there was more colorful language around that — ‘but every time you tell that story, you are an absolutely horrible example to every other person in the room, male or female,'” Dugle said. “So, for me, I’m going to take that on. I’m not going to tell myself ‘no’, and I’m not going to let you tell yourselves ‘no.'”

“One of the core themes of The New IC is expanding leadership opportunities for women,” Heckenberg said. “As the chief executive of a premier services provider to the intelligence and national security communities, Lynn has expertise and insight that will resonate deeply with our attendees.”

INSA’s forum brought together leaders in the intelligence community to discuss the professional issues women face in national security careers, the leadership track for females in the industry, and determine a path to increase representation of women in technology.  The event featured high-ranking women in the Defense Intelligence Agency, U.S. Air Force, the Homeland Security Department, defense contractors, and national security-focused publications, with another keynote addresses by Susan Gordon, principal deputy director of national intelligence.

Dugle is recognized as a dynamic leader in a historically male-dominated industry, and she was the first industry leader to sign the CEO Action for Diversity and Inclusion Pledge. She has received numerous awards and accolades for her efforts, including being named to last year’s Washington Business Journal‘s “Women Who Mean Business” list, and being named one of the most influential leaders in government contracting in 2017 and 2018, and one of the Women Worth Watching in 2017 by Profiles in Diversity Journal.