You are at:Home»Events»Fight Night Mixes MMA and World-Class Entertainment for a Cause 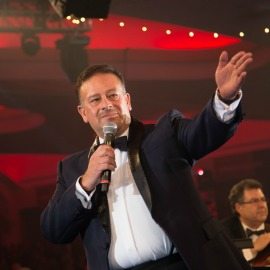 This year’s event features a first-time shift from boxing to mixed martial arts as well as world-class entertainment from Laith Al-Saadi and this year’s headliner, the Hollywood-based all-star superband, Royal Machines. The transition to MMA brings an exciting new element to Fight Night and a new partnership with the Washington, D.C.-based Professional Fighters League, organizers said.

Fight Night matches include championship bouts; Ivanov vs. Alencar and Palmer vs. Siler, as well as Mike Kyle vs. Daniel Gallemore and Timur Valiev vs. Josenaldo Silva. A slate of champion boxers, including Gerry Cooney, Ray Mancini, Earnie Shavers and Buster Douglas will also return as guests of the event.

“I think one of the greatest things about the organization and about Joe was that they helped change the education landscape in Washington, D.C.,” said Raul Fernandez, chairman of Fight For Children. “Fortunately, as the system has evolved, so have we, continuing to be nimble in order to support the children of D.C. in the most impactful way. Today, we remain focused on continuing Joe’s legacy and ensuring that all children in D.C. have an equal shot at a great education.”

Fernandez, vice chairman and owner of the private partnership that owns a number of Washington, D.C.’s professional big league sports teams, said he and Robert met through their mutual activities as alumni of St. John’s College High School. As they grew closer, Fernandez and other supporters promised to continue the organization’s legacy after Robert’s untimely death in 2011.

Fernandez has chaired the organization for six years.

Fight Night raises more than $5 million each year through sponsorship and table sales, a silent auction featuring sports memorabilia and other specialty items, and other donations related to the event. It’s expected to draw almost 2,000 attendees this year.

“It’s truly a unique Washington event with a great heritage,” Fernandez said. “To watch mixed martial arts matches in a ballroom with cigars, and all for a great cause is not something you get to do every day.”