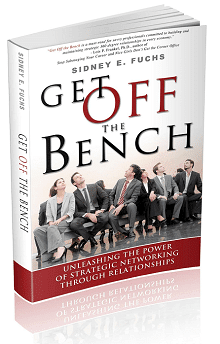 “Get Off the Bench” by noted industry leader Sid Fuchs

What does it take to propel your career? In a word: relationships.

Five years ago, Sid Fuchs published his first book, “Get Off the Bench: Unleashing the Power of Strategic Networking Through Relationships,” which explored the value of building and maintaining productive, trust-based relationships—and the role they play in career growth and fulfillment.

The official book launch, hosted by WashingtonExec, took place at the Tower Club in June 2012, and was attended by over 250 leaders from the public and private sectors.

Since then, Fuchs has been busy sharing the book’s timeless message with a wide variety of audiences, including universities, corporations, government agencies and networking organizations on how to build and maintain successful networks.

“I can’t tell you the number of people who reach out to me and say, ‘I just lost my job, can you help me?’” says Fuchs, president and CEO of the national security firm MacAulay-Brown, Inc. “When markets contract and companies begin downsizing, the power of relationships is in even greater critical demand.”

That message also happens to be one of the most important, yet least practiced, business principles, making Fuchs’ book as relevant today as when first published, says Dr. John Hillen, a leading federal contracting executive and former U.S. government official who now serves as a professor with George Mason University’s School of Business.

“A lot of CEOs can say something intelligent about ‘networking for leaders,’ often based on a long set of experiences, but when you take the time to organize your thoughts and write about it—or teach it—you ascend to a whole different level of understanding about the phenomenon,” Hillen says.

Fuchs’ own career speaks to the power of relationships, coupled with hard work. 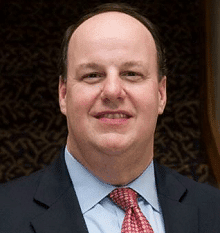 Born on the banks of the Mississippi River in New Orleans, Fuchs learned early about the value relationships in transcending humble beginnings.

After graduating from Louisiana State University with both a bachelor’s and master’s degree in mechanical engineering, Fuchs was recruited by the CIA, and spent nearly the decade ahead as an intelligence officer there. He then moved into the private sector, becoming CEO of four successive companies. Three political appointments rounded out his career before the age of 50.

Fuchs has since led his current company, MacB, through the transformation from largely a SETA provider to a high-end engineering services firm, just as the government services industry was contracting and experiencing a complete market re-calibration.

“When I became CEO many years ago, I learned quickly that I needed to have relationships in this town in order to make things happen —bankers, lawyers, other executives, customers, people across the whole spectrum,” Fuchs says.

Similarly, Fuchs routinely tells other executives and business leaders: “‘Your network has value. It is a tangible asset—it’s like having a college degree or certification.’”

That critically important message routinely leads Hillen of George Mason to invite Fuchs to speak to his MBA students on the power of networking.

“[It’s] always one of the most popular sessions with the students—they all immediately start forming purposeful, strategic leadership networks,” Hillen says.

Among Fuchs’ tips, the most essential come down to seven principles.

“Some people view networking as a mercenary act, like, ‘I’m going to a meeting or networking event and will hand out 100 business cards, and hope someone hires me.’ That is not networking,” Fuchs says.

“If you look at networking from a purely self-centered perspective of, ‘What can I get out of it or another person?’ then it’s not a network; it’s just a loose confederation of acquaintances.”

“Networking is meeting someone and then taking the time and effort to build a relationship while finding a way to help each other,” Fuchs says. “Trust is the currency of all relationships, so ensure trust always exists.”

“A real network is a living, breathing thing that gives and takes, and adds value to everyone in the network.”

2. Get clear on ways to prioritize networking.

Finding the time to network is something busy professionals struggle with; Fuchs was once no exception.

“I think most of us struggle with priorities—we try to do everything, and everything is a crisis, and everything has the same priority,” says Fuchs, who’s been married for 29 years and has three adult sons.

“I learned early in life there were mandatories, such as family, friends and my professional responsibilities, and then there were luxuries, where if I had time do them, I would,” Fuchs says.

“If you integrate your networking into your everyday work life, you don’t really have to create additional time to do it—it’s about planning and prioritizing,” says Fuchs, who carves out business get-togethers over breakfast or lunch, and family time over dinner.

“It’s all about having your priorities reflect what is important to you on a personal and professional level,” Fuchs says.

Having clear priorities will also help determine who makes up your network. “When you need a relationship, it’s too late to build one” Fuchs says. “So figure out what type of network you want or need and then execute the plan accordingly.

Social media sites have their place, but one should never confuse online activity with true relationship-building, Fuchs says.

“If you don’t really know most of the people you ‘connect’ with, then you are not vested in the relationship because you don’t have anything to be vested in—it is just an electronic connection,” Fuchs says.

“You can’t network over Wi-Fi.”

It all comes down to being interested in others.

“First of all, you have to be interested in people,” Fuchs says. “What I enjoy most about my day is never knowing whom I’m going to meet—I never look at somebody and say, ‘That person isn’t someone I’d like to know.’ Everybody is interesting, adds value or needs help, and to me, that is pretty exciting.”

Plus, you have to be consistent.

“You have to return phone calls,” he says. “You have to return email. You have to make time for people and do it in a timely manner. I laugh when someone tells me they were too busy to return my call or email … really?  In today’s world where speed and connectivity are ubiquitous like oxygen, some people think that excuse is still believable.”

A handwritten note of thanks or acknowledgement goes a long way, Fuchs says. “I’m a big believer in thank-you notes, those special touches help to build and maintain relationships,” he says.

Also, if you are going to send holiday cards, don’t do it by email.

“I realize email is more efficient, but it really takes no effort,” Fuchs says. “I still do over 200 holiday cards every year and each card has a personalized note and my signature. It takes time, but then the holidays only come around once a year, so why not make them special?”

Fuchs also recommends getting customized cards with your name as an added touch.

“There is no greater gift, or demonstration of power and self-confidence, than to give someone a true compliment or credit for something they’ve achieved,” Fuchs says. “It builds trust, it makes you genuine, more interesting, and a much more compelling person to be around.”

The opposite, Fuchs says, will only backfire.

“People aren’t fooled,” he says. “They can see through others very easily. I always tell people, ‘Do the right thing, it’s easy and it doesn’t cost you anything. Your actions will speak the loudest for you, more than your reputation and brand.”

“There is enough success to go around.”

While Fuchs travels extensively for work, he finds opportunities to stay plugged in to his network while in transit.

“I’ll sit on an airplane and say, “Who haven’t I talked to in a month?’ and I’ll type up these emails or texts, and as soon as we land, I hit ‘send,’” he says. “That’s the way I keep things going. I may also see an article online and think of a colleague who would like to see it.”

“Also, you have to belong to organizations where you can meet like-minded people, like the Tower Club, and other social and professional groups—and take advantage of the opportunity, to meet people,” he says.

“If you understand and appreciate the value of people and work to build productive and healthy relationships—if you help others and are unselfish with your time, resources and connections—you are going to be a much more able, satisfied and fulfilled person across all facets of your life,” he says.

Get Off The Bench John Hillen MacB Sid Fuchs