In Case You Missed It: Fourth Annual WashingtonExec STEM Symposium

If you couldn’t make it to Virginia’s largest STEM event of the year, don’t worry: Here’s your chance to catch the highlights!

Government contracting leaders were there. So were members of Congress. Add in a surprise visit from America’s great inventor Ben Franklin and astronaut Sally Ride. Plus, a strongman who can bend horseshoes with his own bare hands.

And what do you get?

The Fourth Annual WashingtonExec STEM Symposium offered up a day-long celebration of all the innovative – and wonderfully improbable – ways science, technology, engineering and math, collectively known as STEM, impact our daily lives.

Held at the Nysmith School for the Gifted in Herndon, Virginia, the annual event lived up to its reputation as the largest STEM event in all of Virginia, drawing more than 3,600 people over the course of the day.

More than 40 exhibitors filled the school’s hallways and classrooms with exhibits and makeshift activity stations, focused on a dizzying array of STEM-related activities such as 3-D printing, flight simulators – even ways to make elephant toothpaste.

Reps. Barbara Comstock and Gerry Connolly of Virginia’s 10th and 11th congressional districts, respectively, also joined the roster of speakers and events. Both emphasized the importance of STEM education for the U.S. to stay ahead.

“This is the way we’re going to make our life and our country more safe and prosperous,” said Comstock, who introduced the Inspiring the Next Space Pioneers, Innovators, Researchers and Explorers, or INSPIRE, Women Act this past year in the House. The bill, which President Donald Trump signed into law in late February, instructs NASA to use educational outreach programs to motivate young women to enter STEM professions.

“What we’re celebrating today is the future,” added Connolly, who has spoken at previous years’ STEM Symposium events.

The need for STEM investment remains urgent, said Paul Selby, president of LGS Innovations’ products, solutions and applications division. Selby offered up a sobering statistic: The top 25 percent of students in China with the highest IQs is greater than North America’s entire population; in India, it’s the top 28 percent. 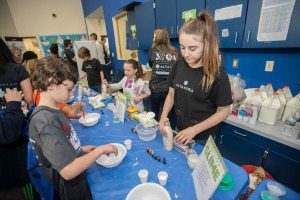 Helping to close the gap are educators like Adalene “Nene” Spivy, executive director of Children’s Science Center, who was presented with an honorary STEM champion award; and students like Aaditya Singh.

The sophomore at Thomas Jefferson High School for Science and Technology joined the lineup of daylong speakers, and explained how his early start at Nysmith paved the way for his passion for STEM and recent admission to MIT, where he’s a rising freshman.

“There is no more high school math for him, so he has to go to MIT,” explained Selby, who shared a panel discussion with Singh, along with outgoing principal of Thomas Jefferson High School for Science and Technology Evan Glazer. All three discussed where the jobs of the future will be.

While no one knows for sure – the past 10 years alone have given rise to new jobs very few could have predicted, like web analysts – this much is clear: STEM will be all-encompassing.

“Everyone from chefs to astronauts will leverage some aspect of STEM throughout their careers,” said Kevin Kelly, CEO of LGS Innovations, who kicked off the event. Along with Altamira Technologies Corp., Vencore, Siemens and the Aerospace Corp., the Herndon, Virginia-based federal networking infrastructure company sponsored this year’s event.

“Our company as a whole is passionate about STEM education,” said Kelly, who traces his own interest in technology back to his high school physics teacher. “She was the first teacher who ever made science fun,” said Kelly, who recalled how his teacher used to dress up like Isaac Newton.

The event included a Ben Franklin impersonator, who dazzled with a “hazzah!” of a performance, recreating how America’s prodigious inventor proved lightning is electricity. Plus, a Sally Ride impersonator passed out autographed handouts about NASA centers and education opportunities, in between sharing tidbits about the first woman (and youngest person ever) to travel to space.

They were both joined by the real deal. 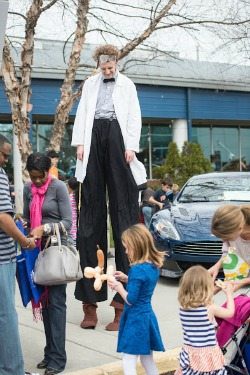 Retired astronaut Lawrence DeLucas shared how a high school chemistry teacher first sparked his interest in STEM. That interest later culminated in DeLucas’ career as a biochemist, capped by a two-week mission aboard the NASA Space Shuttle mission STS-50 as a payload specialist.

Pulling out a “Star Trek flip” phone from his pocket, DeLucas noted, “We thought this was funny in the early days – science fiction writers first told us about [this]possibility.”

Glazer echoed that view. The Thomas Jefferson principal offered an entertaining look at how science fiction can sometimes predict future technologies. “Science fiction is science that has yet to be discovered,” he said.

Predictions that have panned out, Glazer noted, include personalized advertising (courtesy of 2002’s “Minority Report”); video-conferencing (“The Jetsons”); artificial intelligence voice assistants like Siri and Alexa (Hal from 1968’s “2001: A Space Odyssey”); and virtual-reality headsets (“Back to the Future Part II”).

Over the past 10 years alone, technology has given rise to the smartphone, social media, sharing economy platforms – and most critically – data, lots and lots of data. In 2015 alone, societies worldwide generated more data than in the previous 5,000 years combined, noted Selby of LGS.

So what may the jobs of the future look like?

With WashingtonExec STEM Council Chairman Ed Swallow darting around the auditorium with microphone in hand, audience members posed that question to additional panel speakers of the day.

Mike Matthews, director at Vencore Space; Michael L. Orr, director of the Systems Engineering Directorate at the National Reconnaissance Office; and Linda Braun, a vice president at LGS Innovations, noted that, over the next five years, some of the greatest demand will likely be seen in the cybersecurity and material sciences fields.

While it’s important to stay ahead of the curve, it’s also crucial to do what you love. Several speakers emphasized that point throughout the day, including rising MIT freshman Singh.

“Follow your passion and see where it goes,” Singh said. He also had this advice: Go for a job that can’t be taken over, where human connection and interaction are paramount. Whatever you pursue, he added, it won’t necessarily be easy.

“Keep going, no matter how hard it gets – look around for opportunity, seize the opportunity and never let it go,” Singh said.

A firm hold on tough challenges was on full display, quite literally, at the annual STEM Symposium.

Speaker Pat “The Human Vise” Povilaitis is a modern-day strongman who can break baseball bats on his head, roll up metal frying pans (like a fruit roll up, no less) and bend horseshoes – the last feat, he told his rapt audience, leading him to surpass Leonardo Da Vinci as the top horseshoe bender in history.

“In the spirit of challenging myself, I like to come up with interesting and new things,” Povilaitis said.

As if being an LGS engineer wasn’t enough, the strongman hoisted up a 105-lbs. Ford block engine on his thighs and then ripped a pack of playing cards in half – all at the same time.

That physical and mental strength were shaped in the midst of incredible challenge. Born with severe scoliosis, Povilaitis underwent surgery as a teenager to correct his spine.

“STEM fixed my spine,” Povilaitis said. While he was bullied growing up, Povilaitis always knew, he told his audience, he was a strongman inside.

“Success is the offspring of effort,” said Povilaitis, imparting his hard-won life lessons. “Never take shortcuts – don’t listen to naysayers.” That’s why they call it “making progress,” he added. “No one is going to give it to you.”

Most importantly, Povilaitis said, you must learn to fail in order to succeed. That single lesson guided the day-long event. So did the admission that sometimes a next step in one’s education or career occurs by happenstance, by the sheer act of doing and trying.

That very human dimension underpins all STEM fields, according to the day’s speakers, and is sure to inspire the next generation of STEM leaders.

Take the first step yourself, and sign up for the 2018 STEM Symposium.

Hypori CEO Jared Shepard on the ‘Next Evolution in Mobility’