You are at:Home»Execs to Know»Chuck Brooks Wins 2017 Cybersecurity Marketer of the Year 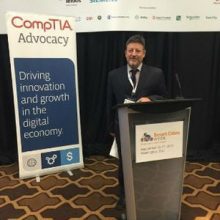 The awards recognize companies, products and individuals that demonstrate excellence, innovation and leadership in information security. The finalists and winners were selected based on the strength of their nomination and the popular vote by members of the Information Security Community (both ratings and comments).

“Congratulations to Chuck Brooks for winning the Cybersecurity Marketer of the Year category in the 2017 Cybersecurity Excellence Awards,” LinkedIn Information Security Community founder Holger Schulze said, whose group organizes the awards program. “With over 450 entries, the 2017 awards are highly competitive. All winners and finalists reflect the very best in leadership, excellence and innovation in today’s cybersecurity industry.”

“Chuck Brooks as Director of Legislative Affairs at DHS, was invaluable to me, the DHS S&T Directorate, DHS, the Nation and Congress in making the ‘reformation’ of DHS S&T a complete success,” former Under Secretary for Science & Technology at DHS Admiral Jay Cohen said. “His Hill/DC acumen, insight, reliability, ability to develop highly effective congressional interaction/communications is without peer in my nearly 16 years dealing with senior executive branch officials, industry, academia and the Congress.”

Brooks was selected by LinkedIn as “One of the Top 5 Tech People to Follow On LinkedIn.” He’s also authored numerous articles focusing on cybersecurity, homeland security and technology innovation.

Brooks worked for many years on Capitol Hill for the late Senator Arlen Specter and covered national security, foreign affairs and technology issues. He also was a member of the Adjunct Faculty at John Hopkins University, where taught homeland security for two years. He has advised a multitude of organizations including the Bill & Melinda Gates Foundation, The Cyber Resilience Institute and the Center for Advancing Innovation.