You are at:Home»Execs to Know»Where Are They Now: Renny DiPentima 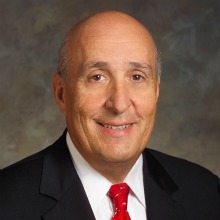 There is no shortage of brilliant minds inside the Beltway, but few are as highly regarded as Dr. Renato “Renny” DiPentima. When he talks, people listen and follow. DiPentima has a depth of knowledge and acute understanding of both the public and private sectors; those insights, combined with his collaborative nature and leadership, have spurred innovation throughout his career.

“My proudest achievement was to be part of a dynamic management team that grew SRA from about $100 million when I joined in 1995, to $1.2 billion,” DiPentima said, “as well as taking SRA public in 2002.”

Although DiPentima admits to missing the people and the environment of SRA, these days he enjoys a different set of stimulating challenges, and a slower pace of life.

“I wanted to give up the 24/7/365 that any CEO must face,” DiPentima explained. “I wanted more time to relax and travel with my wife Pat.”

He is currently the board director on several public and private corporate boards, and senior adviser to McKinsey. He also sits on the University of Maryland Baltimore County Public Policy External Advisory.

“The boards and adviser roles are exciting and challenging,” he noted, “but also allow me more time to travel, and do other things that interest me.”

That includes more time to spend doting on his four grandkids Jack, Tucker, Kate and Grady, who are 10, 9, 8 and 7. DiPentima is also enjoys devoting time to hobbies like boating, sailing, rafting, fishing and crabbing, as well as sitting down with a few good books.

“The two most interesting books I recently read were ‘Hero of the Empire’ by Candice Millard about the early career of Winston Churchill during the Boer War, and ‘A Gentleman in Moscow’ by Amor Towles, about a Russian count who after the revolution is sentenced to confinement in a hotel for over 30 years,” DiPentima said.

Over the course of his career, DiPentima has been honored with numerous awards including two Presidential Rank awards, five Federal 100 awards, the FCW’s Eagle award in 2003, ACT-IAC’s Janice Mendenhall Spirit of Leadership Award in 2006, as well as the Ernst & Young Entrepreneur of the Year 2006 Master Award in Greater Washington.

In 2016, he received the President’s Award from FCW. DiPentima was also among the first five inductees into the FCW Hall of Fame.

Though DiPentima has received numerous accolades, many may be surprised to learn he is also an accomplished marathoner.

“I have run six marathons,” he said, “including the New York and Marine Corps marathons twice.”

So what’s next for Renny DiPentima?

Watching Navy football (he’s a big supporter of everything Navy) and travel top his list.

“My wife Pat and I leave for Australia and New Zealand soon,” he said, “and we travel to Europe at least once a year.

Related: Where Are They Now: Tim Keenan

Renny DiPentima Where are they now