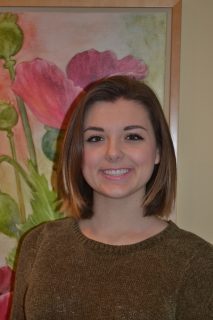 As a rising high school senior, Emilia Cabrera’s curiosity led her to discovering her love for solving problems through Computer Science. Throughout her AP course, she began to notice how many girls did not consider Computer Science as a plausible career path. Though many programming techniques through video games are geared toward the interest of boys, she knew that diversity would benefit the future workforce. Emilia founded I.T. Girls to encourage girls to look into Computer Science and to negate any drawbacks of being a girl in the Computer Science field.

We recently conducted a Q&A with Emilia Cabrera about her interest in Computer Science, why she founded I.T. Girls, and her thoughts on confidence and future careers.

WashingtonExec: How did you become interested in computer science?

Emilia Cabrera: My interest in computer science began last year, as a sophomore in high school. Throughout elementary and middle school I was more interested in English, because it tapped my creative side. Once I got into more advanced math and science courses in high school, however, I realized I that solving problems can be just as creative and fun. Even then though, computer science was not yet on my radar.

It was my older brother who was the technology geek in our house. He had always been interested in computers and video games, and had taught himself to code from a young age. In high school, after taking AP Computer Science, he recommended that I take it, knowing my very analytical thought process and interest in STEM. I had little idea of what computer science was, and did not believe it would be something of interest, but with an available slot in my schedule and the curiosity to try new things, I decided to take it.

As it turned out, my brother was right and I ended up loving AP Computer Science I found my passion in using the analytical, algorithmic logic of math with more creative freedom than I ever got in any English class to create real solutions to real problems through code. It was a gateway to what I hope will be my future.

WashingtonExec: Why did you found I.T. Girls, the club for girls in technology at your high school?

Emilia Cabrera: I was fortunate to have an older brother who encouraged me to try computer science. But once I did, I realized not many girls have that influence and there were very few girls in my class. It was not a question of rigor – in my advanced math and science classes there are at least 50% girls, if not a majority. So it had to be a question of interest, and I realized that most girls never even consider computer science, because they never have the opportunity to be exposed to it and develop an interest.

Lots of boys find their way into the technology field through video games. It is a wonderful avenue for technological interest as boys go from playing the games, to wondering how they’re made, to creating their own mods for certain games and falling into this huge world of computer science and technology. However, our culture has no such avenue for girls. Yes, there are video games for girls, but most are heavily targeted to boys. Once kids get into high school and start exploring more subjects, STEM students realize that math and problem solving is for them, but often girls believe it is too late for them to learn computer science. Unlike the foundation of math and science that all students have from elementary school, computer science is often brand new. How are girls supposed to keep up with boys who have been programming since they were twelve?

I know I had that experience when in my very first computer science class I was seated next to a guy who told me stories of all his minecraft mods and his previous computer experience. It was intimidating, but by the end of the year, I found that I could program just as well as any of the boys in my class, despite having less experience.

My club, I.T. Girls, was created to foster the interest of girls in C.S. and to do away with any worries of inadequacy. Our membership is composed mainly of people who have never taken a computer science course, but are thinking about it. Through workshops we teach some basic computer science skills that give girls the confidence to take technology courses later on, either in high school or in college. Not only do we deal with the technical aspect, but we also deal with some of the psychological and social barriers to getting into technology as a woman. Giving girls the opportunity to interact with professional women in technology through panels reduces the negative stigma surrounding the industry, and club discussions get girls to think about all the potential that a career in technology offers.

WashingtonExec: Why do more girls need to get involved in computer science and technology?

Emilia Cabrera: With smart phones always in hand, our world is growing more and more dependent on technology. To shape a diverse, brighter future, we need diversity among the people creating the technology that will be our future. Innovation stems from a diversity of ideas, and those only arise when groups with diverse backgrounds come together. If women keep shying away from technology, we are gathering half as many ideas as we could be. Widening the pool of possible solutions will accelerate and improve innovations.

More women in computer science would also provide better knowledge of the audience when creating new technology. Though product developers believe they are targeting broad audiences, they often end up making programs and devices for people with needs and problems similar to their own. Getting women into the technology industry will allow for innovations targeted to our particular problems and needs. If we want to see better portrayals of females in video games, guess what? We need women in video game development.

There is also the question of pay inequality. Though technology has showered us with incredible benefits, it does come with a down side – a widening skills gap and, along with it, mounting inequality. Technology is now integral in every industry from fashion, to business, to agriculture. People with no understanding of it can get cut off from advancing in their career paths before they even get a chance to prove their other skills. This is a problem with all minorities, but the fact that almost 50% of our population is being left behind due to a lack of technical skills is especially detrimental. We need to teach everyone at least basic technology skills so that they will be more competitive in an increasingly technology driven job market.

Most of the pay inequality between men and women has to do with industries. Industries that are predominately female have lower salaries on average in comparison to those that are predominantly male. With computer science being one of the most lucrative careers possible, why wouldn’t we want more women to get a slice of those profits?

WashingtonExec: What have you learned from participating in hack-a-thons?

Emilia Cabrera: The two hackathons I have participated in have given me real experience that I could never get inside a classroom setting. In the spring of my sophomore year, I attended HackTJ on a whim with little idea of what a hackathon was. Upon arrival, I was given my instructions: code something in 24 hours. People immediately started talking about their apps or websites, and I soon realized that the text-based java programs that I had been learning in my AP Computer Science class were not going to cut it for this event.

The number one thing I learned was to ask questions. To get started, I went to an android development workshop where I met Michael Evans, an android developer at Living Social and a mentor at the hackathon. Throughout the course of the night I talked through every big road bump in my program and finished the event off with a fully functioning application. The app was simple, but my partner and I were proud that we created something functional with no previous android experience.

To our surprise, we actually won the Best Beginner Hack Award. Though our idea was simple, we were some of the only beginners to successfully create an application, and it was primarily due to the fact that we had no qualms about asking the mentors around us questions and learning from their experiences.

Another thing I learned at the hackathons is the power of self-confidence. In the opening of the hackathon we were told to find teams. My friend and I were rather inexperienced, but some friends of ours came up to ask us about our level of computer science. All I could think about was what if I told them I could do something and halfway through the night they figured out that I didn’t really know what I was doing and I was dragging the team down. Not wanting to disappoint them, I sold myself short, telling them that I had very limited knowledge of java. They promptly went searching for other partners.

Though I did end up having a great experience, I know that if I had been more confident in my abilities, I could have learned a lot by working alongside more experienced students. Modesty is considered a virtue, however, it can hurt girls, especially those pursuing competitive careers. Confidence is the true virtue.

WashingtonExec: Do you see yourself pursuing a career in computer science?

Emilia Cabrera: I know I want to pursue an education in computer science, mainly because I don’t know yet which career path I will be interested in, and computer science allows me flexibility in the future. Technology is part of every industry and this trend will continue to grow. No matter what I do, a knowledge of computers will help me find my path, perhaps in bioinformatics or computational mathematics. My future career may not even exist at this point given how quickly the technology sector is growing, and that’s the exciting part. My love of learning will always be satisfied as new languages and applications of computer science appear every day. So who knows what I’ll end up doing!