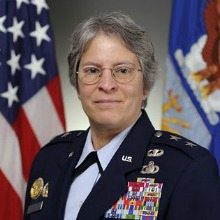 It was recently announced by the National Geospatial-Intelligence Agency that U.S. Air Force Maj. Gen. Linda R. Urrutia-Varhall has been named as the new Director of Operations. She will be responsible for NGA’s operational support worldwide and carrying out the agency’s mission across the intelligence community along with the Department of Defense.

Robert Cardillo, Director at NGA stated, “I’m eager to add UV (Urrutia-Varhall) to NGA’s leadership team. I have worked with UV before and know she brings remarkable skill and experience to this important position. She knows the intelligence community and intelligence, surveillance and reconnaissance operations form the flight line to the Pentagon.”

Urrutia-Varhall will begin her new position from the Pentagon where she served as the assistant deputy chief of staff, intelligence, surveillance and reconnaissance. Previously Urrutia-Varhall held several key intelligence positions which include director of intelligence at U.S. Southern Command, senior executive officer to Director of National Intelligence James Clapper, and Director Clapper’s senior military assistant.