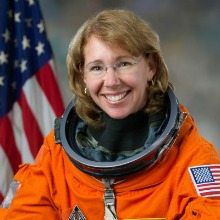 Astronaut Dr. Sandra (Sandy) H. Magnus will return to the WashingtonExec‘s K-12 STEM Symposium on March 12, having last spoken at the 2014 event. She will speak about the best practices across the K-12 pipeline for STEM career choices.

The Executive Director of the American Institute of Aeronautics and Astronautics seeks to expose the young students to the possibilities open to them by studying math and scientific fields.

In talking about her experiences working at the International Space Station and taking part in high-profile NASA missions as well as how she became an astronaut in the first place, Magnus said “space has been nothing but fun and adventurous.”

“It’s hard to picture yourself as an astronaut, but don’t be afraid. Go after it,” she said, explaining that she wanted to test herself to see if she truly could become an astronaut. “I didn’t want to look back and think, ‘What if?’”

It was in college that she discovered that engineering was a means of “taking physics and building something with it.” That led to studying electrical engineering. Then Magnus entered the study of materials, a field she “didn’t realize existed until then.” 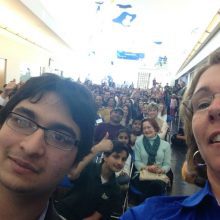 Archis and Dr. Sandy Magnus, “selfie” at the 2014 STEM Symposium

“The moral of the story is you don’t know what you don’t know about what might excite your passion and your interest,” she noted. “As you go through your life …you suddenly see a whole other range of choices. The world gets expanded more and more.”

The theme of the 2016 Symposium is “Opportunities in STEM,” aimed at o help children specifically in the National Capital Region discover new and exciting possibilities in the mathematics and science fields. One way to help motivate a child’s interest in STEM is to help direct interest to local opportunities such as summer programs, family activities, science fairs and technology applications.