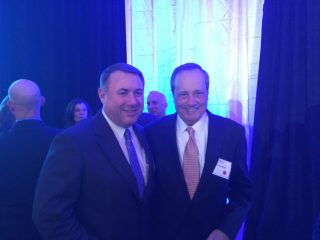 NCI Inc. board member Paul Lombardi was inducted into the Greater Washington Government Contractor Awards Hall of Fame. He was recognized as this year’s Hall of Fame honoree for unparalleled professional excellence and life-long contributions to the community and government contracting industry.

“The Hall of Fame induction is a strong testament to Mr. Lombardi’s unwavering commitment to the government contracting community and service to the public sector,” NCI’s President and CEO Brian J. Clark said. “From the entire NCI family, we congratulate him on this prestigious honor and thank Paul for his continued support to NCI as a member of our board of directors.”

Lombardi has served on NCI’s board of directors since October 2004. He previously served as DynCorp’s President and CEO, and has held other executive-level positions, including PRC’s Applied Management Group’s Senior Vice President and General Manager. Before entering the private sector, Lombardi worked for 17 years in the public sector and held executive positions in the Dept. of Defense and the U.S. Dept. of Energy.