You are at:Home»Execs to Know»SRA Founder Dr. Ernst Volgenau Discusses the Company’s Journey from Basement Idea to NYSE 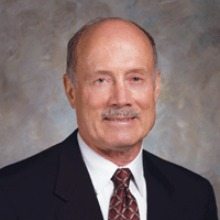 From a business that was started in a basement to one that was publicly traded on the New York Stock Exchange, Dr. Ernst Volgenau of Fairfax,Va.-based SRA has seen the journey of a company from an idea to the marketplace.

The lessons he’s learned along the way are documented and in his book, Geeks, Mush Heads and the IT Revolution: How SRA International Achieved Success Over Nearly Four Decades, published in November 2014.

WashingtonExec spoke with Dr. Volgenau about his inspiration for the book, surviving the dot com boom, the recent economic downturn and the company’s enduring values.

WashingtonExec: What made you write this book?

Dr. Ernst Volgenau: I wanted to write a history to honor the many people who have made our company so successful for so long. But then as I began to write it, I said to myself, “This is more than a history; it’s a business book, and there must be a lot that we have learned over more than 35 years of history.”

WashingtonExec: What do you consider inflection points in your career and what kind of key decisions — good or bad — made you and SRA as successful as it was, and is, today? 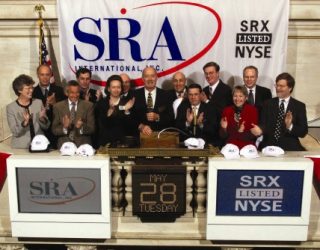 Volgenau: I had, like most people, a number of inflection points in my career, but the largest occurred after I had completed 20 years in the military and a couple of years in the senior civil service and then decided to start a firm. That was a totally different endeavor for me. So that was, by far, the biggest inflection point other than getting married, of course. The inflection points for SRA and key decisions are quite involved and are addressed in my book.

WashingtonExec: Can you talk about changing the company’s logo and tagline last year?

Volgenau: I have a 30-year-old sweatshirt that has a SRA logo which is very similar to the logo that our company announced in August 2014.

I also support the tagline, “Enduring values and inspired performance.” To me, the most important thing is Honesty and Service, which is the basis of our enduring values. Honesty implies great ethics, complying with the letter and spirit of the law. Service has three components — quality work and customer satisfaction, taking care of our people, and serving our communities and country, and for that matter, world society.

It turned out that those values helped to make us a business success. In fact, they were the single biggest factor because many capable people want to work for a company that has high ideals. Our values made it easier for us to recruit and retain capable people. That was the secret to our performance. We did not adopt Honesty and Service for business reasons; we did it because of our idealism.

Honesty and Service are enduring values. Inspired performance addresses the other aspects of our business. 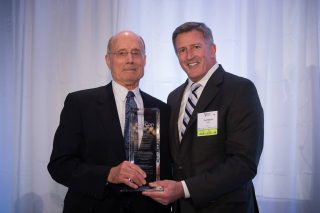 WashingtonExec: What is your opinion of today’s federal IT market? Some industry leaders have said that they see the industry’s up and downs as a part of a 20-year cycle, like other industries. What is your view?

Volgenau: I do not believe in a 20-year lifecycle. First of all, the government market is wonderful. IT continues to grow and contracting procedures tend to improve. I’ve been involved in information technology for many, many years — long before personal computers, back in the mainframe days. There has always been a lot of government information technology and it’s always grown, not every year, but at least over periods of five years.

There was a setback around 1989 when the Berlin wall came down and the Soviet Union collapsed a couple of years later. Suddenly the Cold War was over, so naturally people said, “Let’s reduce the defense budget,” This slowed government information technology spending. However, in a few years, other needs took its place. Improvements in technology made people think that IT could make government more efficient. And that has been the quest since then.

If we fast forward to 2008, the beginning of the recession, there was a decline in business profits that made the budget deficit worse. We were fighting two wars that we hadn’t paid for, without increasing taxes. This policy, combined with entitlement spending, led to a big budget deficit. Now people are complaining about this — the Democrats want more social spending, the Republicans want more defense spending. Therefore, we have political deadlock which has helped slow the government IT market. Our market hit a peak about 2010. Then it declined slightly for about three years. Now it may be growing slightly.

WashingtonExec: How did you make the transition from being a military professional to deciding to found a business?

Volgenau: Over the years, a lot of people have said to me, “I’m going to start a company like you.” … Very few of them have actually been successful doing it.

First, you need to have a market difference. You need something that will distinguish your company, for example a technical capability. In most business applications, you need to be able to combine technology with social institutions in complementary ways. Technology by itself is not enough.

Second, you need a good plan. You must have thought through how you are going to bring your ideas to market. Who are you going to hire? What are market segments and contacts? Planning takes time and self-discipline. Finally, you must endure financial risk, you must put in a lot of long hours, and you need a patient spouse that will put up with it.

If an established company is well run and idealistic, a professional career is far better for most people because it doesn’t involve those other factors, and yet you can still have a fulfilled life. You can feel as though you are making a contribution to society, but not sacrificing your family or your personal life as is the case for many entrepreneurial ventures.

WashingtonExec: What do you recommend for maintaining and retaining top talent?

Volgenau: To me, the answer is enduring values. After we encountered business problems we sold the company in 2011. We hired a new very capable, young CEO. He had to learn all about our market and how our company worked. After a couple of years, he concluded that our problem was that we had drifted from the values of Honesty and Service. We weren’t mistreating people, we just weren’t taking care of them so they didn’t feel special and they didn’t feel like the company was special. Therefore we lost some really good people. Our CEO began a campaign to restore those values and made important business changes as well. The results are still not clear, but we have positive indicators. I think the maintenance and restoration of the values is the secret to our success. It’s all about our good people.

WashingtonExec: What are you and Mrs. Volgenau currently involved in?

Volgenau: My wife, three daughters and I have a foundation which is devoted to conservation because we feel that people are using up the earth’s resources too rapidly, for example pollution in the atmosphere leads to global warming. Our family foundation is also focused on the academic and ethical education of needy children.