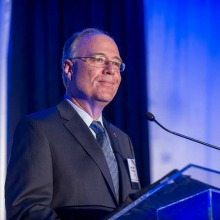 AMERICAN SYSTEMS, the Chantilly, Va.-based government IT solutions provider and one of the top 100 employee-owned companies in the U.S., is marking the 40th anniversary of its founding this year. Founded in 1975 by H. Thomas “Tom” Curran, the company got its start in providing technicians to telecommunications firms. In 1976, Curran joined forces with Forrest “Woody” Ramsey, and the company’s initial focus was expanded to include systems engineering for U.S. submarines, primarily the TRIDENT class.

Current CEO Peter Smith first joined AMERICAN SYSTEMS 35 years ago to work on the TRIDENT submarine program. Today, the company is a broad-based provider of services and solutions to government customers in support of national priorities, with annual revenue of approximately $325 million. WashingtonExec recently spoke with Peter Smith about what has driven AMERICAN SYSTEMS to success for 40 years.

WashingtonExec: To what do you attribute AMERICAN SYSTEMS’ successful 40-year record of providing services to the government?

Peter Smith: We have been in business since 1975 and throughout our tenure, we’ve made a great effort to solve problems for our customers. In other words, we’re recognizing what’s important to them and stepping up to the table to be as helpful as possible as they work to meet their mission requirements.

We’ve always focused on national priorities, making sure we are in relevant spaces for the federal government and pursuing the very important missions that they’re trying to accomplish for the American people.

In addition to our customer, we have two other very important constituencies that we always keep in mind—our employees and our shareholders. With everything we do, we make sure it makes sense to all three of those constituencies and that we are bringing our best capabilities forward at all times.

WashingtonExec: Could you share what it means for AMERICAN SYSTEMS to be a majority-owned Employee Stock Ownership Plan (ESOP) company. How does this differentiation affect the success of your company?

Peter Smith: In addition to our 40th anniversary of the company doing business with the federal government, this is also our 25th year as an ESOP company. In 1997, our original founders sold their remaining shares to our company, putting us in a position to be a majority-owned ESOP. It meant a lot to the employees that we could continue as AMERICAN SYSTEMS and that we could become shareholders in the company; this model has served us well all these years. It’s been an important part of who we are, and as we support our customers, we have found that they’re very pleased to do business with employee-owned companies because they feel that employees who are also shareholders have a vested interest in how well the company does, which reflects almost directly on the quality of the services that we provide to them.

It’s also a great recruiting and retention advantage. As I mentioned, it’s very important to our employees that they’re also our shareholders, so it becomes an advantage to AMERICAN SYSTEMS when we are recruiting for highly sought-after talent. If they’re considering joining a company where they don’t have the opportunity to be part of an ESOP and they’re also considering AMERICAN SYSTEMS, we find that the ESOP draw helps pull them towards AMERICAN SYSTEMS. Then once they’re in, seeing what good things are happening with their ESOP accounts encourages them to stay and remain a part of AMERICAN SYSTEMS’ success going forward. They know that when it’s time for them to retire, they will have the benefit of the plan behind them.

WashingtonExec: What has been the greatest challenge the company has faced, and how did your team step up to meet that challenge?

Peter Smith: Growth is always a challenge. It’s a challenging market, and it’s very competitive because there are a lot of great companies in this space, and AMERICAN SYSTEMS is always looking to improve its ability and positioning to compete.

As we worked our way through that, our mindset needed to shift, too. We needed to not only have very strong technical capabilities in the company, but also very strong management capabilities in the company. We had to demonstrate that AMERICAN SYSTEMS has the capability to run a large contract and to manage all the subcontractors that came along with that, ensuring that the customer was getting the full value from that contract.

So we concentrated on what we call the 3 P’s: processes, people and pipeline. Having solid, repeatable processes demonstrates to any customer that you can be counted on to deliver predictable and repeatable results. Having people who are highly skilled in these areas, and can use these processes effectively to deliver the services, is equally important.

Finally, having a robust pipeline of opportunities coming into the company so we can continue the growth pattern that we’ve been looking for is very important. We have done well in this area; now we’re earning more than two-thirds of our revenue from prime contracts, and we’re looking to improve that number even more as we go forward.

WashingtonExec: What advice can you offer other contractors who are in the earlier phases of their business?

Peter Smith: There really are two perspectives on that. The first one is to keep your eye on the ball. Don’t try to get too far out in front of yourself; concentrate on your strengths and core areas, and build off of those in a systematic process to ensure that you can keep your quality level up. The quality of service that you deliver is vitally important not only to keeping your customer base, but also to demonstrating that you can do more in larger areas.

WashingtonExec: What are you most excited about for AMERICAN SYSTEMS in the coming year?

Peter Smith: We’ve always concentrated on supporting national priorities, and certainly healthcare is becoming a more important function of what the government is doing. Whether you agree with it or not, it is where the government is going. So positioning AMERICAN SYSTEMS to do well in that area is an important part of the market that we’re looking to move into as well. We’ve got some background in this area from a perspective that might not occur to everyone immediately, and that is in the area of identity intelligence.

When we talk about identity intelligence, people typically think about law enforcement or cyber security, attaching the intelligence to identifying someone whom you need to keep an eye on because they might be up to mischief of some kind. We are translating that thought to the healthcare market from a positive perspective, where it’s so important to make sure you’ve got the proper identity around patients. This involves managing the care that they’re getting, who they are, and the information that’s derived from that care, as well as managing all of that as a bundle and making sure that the appropriate information is tied to the correct person.

On the technology front, all of the great work that’s being done to make information more readily available to everyone is what we’re using to tie our distributed workforce together, making sure that we’re communicating with all the employee-owners of AMERICAN SYSTEMS effectively. We’re making sure they’re getting information that they need that’s relevant to them, regardless of where they’re located—on a customer site, a field office, wherever that might be. It just goes such a long way to help them feel a part of the AMERICAN SYSTEMS family no matter where they might be working or what customer they might be supporting.

That also carries over into our customer space; there is so much going on with data analytics and information assurance, making sure that our customers get accurate, concise information that they can rely on to make good decisions is very important, and we’re working with them to understand their operational needs and to support their mission. So there’s a lot of great stuff going on out there, and I think the future is very exciting, frankly.

WashingtonExec: When you aren’t busy running a company, how do you like to spend your free time?

Peter Smith: I’ve been the CEO at AMERICAN SYSTEMS since August of last year, so free time has been a little hard to come by lately. When I do have free time, I love spending time with my family. I’ve got two daughters who’ve just started to move away from the house, and my wife of 34 years and I are doing a lot of traveling and getting acquainted again. It’s a wonderful time of life.