You are at:Home»News»Nysmith School Team Among CyberPatriot Finalists, Scheduled to Compete in Nationals March 13-15 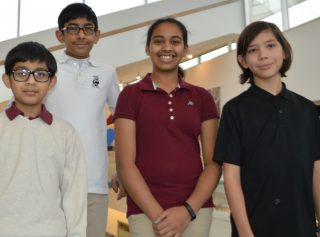 WashingtonExec spoke with the team members and met the team coach, Bonnie McCrystal.

WashingtonExec: Why did you decide to get involved with CyberPatriots?

Bhavjeet Sanghera: I was interested in how computers work and wanted to learn more. I thought this would be a great learning experience.

Aryaan Hussain: I’ve been working with computers since I was young. I’ve always been surrounded by technology, and I wanted to learn not just about Windows, but also how Linux system works.

Ryan McCrystal: I just think computers are cool and the fact that with programming, you can make them do whatever you want.

WashingtonExec: Do you think you’ll continue being involved with cybersecurity after CyberPatriots is over?

Aryaan Hussain: I think it would be a great career aspiration, and there’s a lot of different fields that computers are involved with, like the computer science and medical fields. As far as technology goes, I think I would like to stay in the field.

Bhavjeet Sanghera: As technology advances, there’s a greater need for securing our data. Regardless if I want to be in the field or not I will end up being involved with cybersecurity someday.

Ryan McCrystal: Since technology is growing so fast and more governments are writing and saving things in cloud, it would be good to get a job in the field since we’re using computers more and more.

Monica Saraf: I think I want to continue doing this for a while because it’s something we’re going to need for the future.

WashingtonExec: What was your reaction when you learned you had made it to the finals?

Monica Saraf: We were actually pretty confident from the beginning because we had been placing well, so we knew had a good chance to go to the finals.

CyberPatriot is the National Youth Cyber Education Program, which puts teams of high school and middle school students in the position of newly-hired IT professionals tasked with managing the network of a small company. In the rounds of competition, teams are given a set of virtual images that represent operating systems and are tasked with finding cybersecurity vulnerabilities within the images and hardening the system while maintaining critical services.

The Program was created by the Air Force Association to inspire high school students toward careers in cybersecurity or other science, technology, engineering and mathematics (STEM) disciplines.

The National Finals Competition will be held March 13-15, 2015, at the Gaylord National Resort and Convention Center, in National Harbor, Md.

Ryan, Aryaan, Bhavjeet and Monica will showcase their robots at the 2015 K-12 STEM Symposium on March 7 in Herndon, Va.