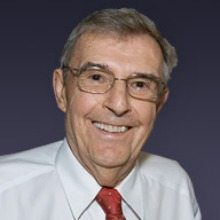 While Dr. J. Robert Beyster might be remembered most for starting Science Applications International Corporation (SAIC) in La Jolla, Calif., another large focus in his life was sailing.

Dr. Beyster died of natural causes on Monday, Dec. 22, 2014 at his home in La Jolla, wearing his favorite sailing clothes, including an America’s Cup jacket and his University of Michigan cap. He was 90.

“We are incredibly saddened by the loss of Dr. Beyster,” Leidos CEO Roger Krone said. “In 1969, he was an accomplished physicist who founded SAIC, now Leidos, etching his scientific background into a company that would be driven by innovation and entrepreneurship. Over the past forty years, his legacy has inspired the thousands of employees who followed his footsteps and influenced an industry that touches on all facets of American life. Our hearts and thoughts are with his family.”

Dr. Beyster was born in Detroit, Michigan, in 1924 to John F. and Lillian E. Beyster, and he grew up in Grosse Ile, Mich. He attended Slocum Truax High School in Trenton, Mich., and was salutatorian of his graduating class. As he prepared to graduate from high school, the United States entered World War II, and he enlisted in the Navy. He was sent by the Navy to the University of Michigan, where he was enrolled in the V12 Officer Training Program. He was commissioned as an ensign, and eventually served on a destroyer based in Norfolk, Va. before leaving the service six months later. Beyster received a B.S.E. in engineering and physics in 1945, a master’s degree in physics in 1947, and a doctorate in physics in 1950 — all from the University of Michigan.

In the early 1950s, Dr. Beyster worked briefly for the Westinghouse Atomic Power Division on the company’s nuclear submarine program. He soon followed many of his college associates to New Mexico to work as a research physicist at the Los Alamos National Laboratory, where he met his wife-to-be, Betty. The couple were married in Austin, Texas in September 1955. In 1957, Dr. Beyster joined General Atomic in La Jolla, as chairman of the Accelerator Physics Department, where his research on neutron thermalization led him to coauthor the book Slow Neutron Scattering and Thermalization.

In 1969, Dr. Beyster raised money to start SAIC by investing the proceeds from selling stock he had received from General Atomic, combined with funds raised from the early employees who bought stock in the young enterprise. Initially, the company’s focus was on projects for the U.S. government related to nuclear power and weapons effects study programs.

Dr. Beyster developed one of the first high-tech corporations with broad-based employee ownership and profit sharing, and he demonstrated that broad-based financial inclusion could work and prosper. SAIC attracted and retained entrepreneurs who helped the company grow and diversify. When Dr. Beyster retired as chairman of SAIC in 2004, the company had annual revenues of $6.7 billion and had more than 43,000 employees.

With his wife Betty, Dr. Beyster was an active participant and philanthropist in the San Diego community. In support of their longstanding interest in education and healthcare, together they have also made major gifts to the University of California, San Diego (UCSD) — including UCSD’s Sulpizio Cardiovascular Center and the Beyster Institute for employee ownership — University of Michigan College of Engineering, the University of San Diego Hahn School of Nursing and Health Science, the J. Craig Venter Institute, Salvation Army Door of Hope, Father Joe’s Villages/St. Vincent de Paul, San Diego Regional Fire Foundation, KPBS, the San Diego Public Library, La Jolla Music Society, Achievement Rewards for College Scientists (ARCS), Rutgers School of Management and Labor Relations, and the Foundation for Enterprise Development (FED).

Dr. Beyster founded the FED in 1986, dedicated to the growth of U.S.-based science and technology companies through research, education and services that advance innovation, entrepreneurship and broad-based ownership. In 2004, the FED launched the Beyster Institute at UC San Diego’s Rady School of Management to advance the practice of employee ownership with technologists, entrepreneurs, executives and educators.

Dr. Beyster wrote or co-authored approximately 60 publications and reports, as well as the books The SAIC Solution: Built By Employee Owners, and Names, Numbers, and Network Solutions: The Monetization of the Internet. He was also a fellow of the American Nuclear Society, the American Physical Society, a member of the Scientific Advisory Group to the Director, served on the Strategic Target Planning Staff of the Joint Chiefs of Staff and was a member of the National Academy of Engineering. He also served as Chairman Emeritus of the Board of Directors of the University of California San Diego Foundation.

The Defense Advanced Research Project Agency (DARPA) designated Dr. Beyster an Honorary Program Manager for his distinguished contributions to the agency during his career. He also received the Engineering Manager of the Year Award in 2000 from the American Society of Engineering Management, the 2001 Spirit of San Diego Award from the San Diego Regional Chamber of Commerce, the Lifetime Achievement Award from Ernst & Young in 2003, and the “Supporter of Entrepreneurialism” award from Arthur Young and Venture magazine for his efforts to support and promote entrepreneurship.

Dr. Beyster is the recipient of a lifetime achievement award from the University of California, San Diego’s CONNECT program for providing 25 years of outstanding service to the community. The Horatio Alger Association for Distinguished Americans selected Dr. Beyster to be a 2008 Horatio Alger Award recipient. This honor is bestowed upon those individuals who have overcome adversity to achieve great successes through the American free enterprise system.

Dr. Beyster was an avid sailor and longtime member of the San Diego Yacht Club whose interest in the sport piqued when the U.S. lost the America’s Cup in 1983 to Australia. Convinced that the loss reflected a weakness in the naval architecture technology selected by the New York Yacht Club, Dr. Beyster suggested to fellow San Diego Yacht Club members Dennis Conner and Malin Burnham that SAIC’s naval architects could provide the winning edge. They agreed, and SAIC became a major participant on the technical team — playing an instrumental role in helping Conner’s boat Stars & Stripes defeat the Australians in 1987 and bring the Cup back home to the United States — an outcome of which Dr. Beyster was particularly proud.

He is survived by his wife of 59 years, Betty, of La Jolla; daughter Mary Ann, of La Jolla; sons Jim, of San Diego and Mark, of Las Vegas; two grandchildren; one great-grandchild; and a sister, Virginia.

A private, family memorial service will be held at Greenwood Memorial Park in San Diego. A public service will be announced in the new year. In lieu of flowers, the family suggests donations to the Salvation Army Door of Hope in San Diego, Achievement Rewards for College Scientists (ARCS) Foundation for scholarships, or the Foundation for Enterprise Development to support employee ownership.