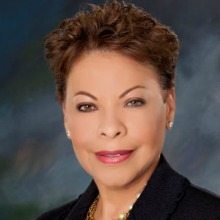 AFCEA International recently appointed Linda Gooden as Chair of the Board. For more than 15 years, Gooden has worked in the aerospace and defense community through AFCEA. She has served on the association’s board of directors, been a member of its Executive Committee, and she has also served as chair of the Audit Committee. Currently, she chairs the Budget and Finance committee, and she has been an AFCEA member since 1997.

“I am deeply honored to be elected as the chair of the board for AFCEA,” said Gooden. “I’m looking forward to leading such an amazing organization, which has worked for 68 years to provide a forum for the ethical exchange of information through the exploration of issues in information technology, communications and electronics for the defense, homeland security and intelligence communities.”

In her role as Chair of the Board, Gooden oversees AFCEA’s Executive and Compensation committees, as well as participates on the AFCEA Educational Foundation board of directors.

Gooden retired from Lockheed Martin Corporation as the executive vice president of the company’s Information Systems & Global Solutions (IS&GS) business area. She has received many honors, including Fortune magazine’s Top 50 Most Powerful Women in Business for 3 consecutive years, Washingtonian magazine’s Washington’s Most Powerful Women and more.

Gooden graduated from Youngstown State University with a computer technology degree, as well as from the University of Maryland with a bachelor of science in business administration and a master of business administration. She serves on several other boards, including the Eisenhower Fellowships Board of Trustees; TechAmerica; University Systems of Maryland Board of Regents; and the U.S. Naval Academy Foundation. In 2010, President Obama appointed Gooden to the National Security Telecommunications Advisory Committee.

AFCEA International’s president and chief executive officer, Kent Schneider, described Gooden as a long-time leader in industry and AFCEA. “We are delighted to see her move to the position of chair of the AFCEA Board of Directors and look forward to her leadership in the association and the community,” he said.