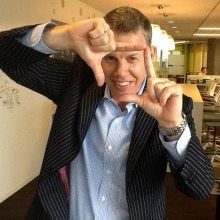 The social media landscape has changed quite a bit since Twitter first taught the world to think in 140 character thoughts after its public launch in July 2006.

Dr. JR Reagan, a principal at Deloitte and the lead client service partner for the company’s Department of Homeland Security National Protectorate Programs Directorate, is among the rising number of executives who’ve taken to the short-message medium in order to build their personal brands, aid their businesses and feed their interests.

The TEDx speaker touts a following of more than 36,000 and is attempting to rewrite for fellow executives the narrative that social media tools like Twitter are only for younger users.

“I think that if we fast-forward the movie a little bit, in a couple of years this will be so basic to how we do business we won’t even remember a time when we didn’t do it,” Reagan told WashingtonExec in a recent phone interview, alluding to the inevitable ubiquity of social business.

Not that Reagan has always been a herald of social media. He remembers being wary of Twitter when the medium first gained popularity.

“I was a huge cynic of Twitter at the time because I was used to seeing more of those headlines about people tweeting about their lunch and stuff,” Reagan said. “I never saw the value in it, but I was curious about how it could be valuable.”

Identity and Interest Construction
That all changed when a colleague clued him in on how to use the site as a tool to make better use of the time in his day by allowing him to aggregate and access content he found interesting – on his own time.

“The light bulb went off at that point and I started looking at it as a micro blog and being able to bring those interesting things to me,” Reagan said.

The cyber security, digital trends and innovation enthusiast composed his first tweet four years after the site’s launch in October of 2010.

The message, posted at 6:30am, linked to a ZDNet article about cyber attacks to the UK government’s computer systems: “@IdeaXplorer: GCHQ: Government Systems See Thousands Of Attacks http://is.gd/g1uUc.”

Twitter transformed for Reagan the way he came to consume his daily brain fodder by enabling him to access the content he wanted, when he wanted. He typically tweets articles aimed at provoking thought – from articles relating to the “science of brainstorming” to “how workaholics are costing the economy.”

“I treat Twitter to a large degree the way I used to treat newspapers and magazines. We all peruse those, looking for little things that interest us, and that’s what I do on Twitter. I follow a trail of breadcrumbs that lead me to other interesting stories,” Reagan said. “It’s become my daily newspaper, if you will, so I look at those articles that I want to dive further into and sometimes I’ll read them right away, but more often than not, I’ll put them to the side for when I have more time.”

Value for Business
Eight years after its launch, Twitter has plans in the works to transform itself into “the largest information network in the world,” according to Twitter CEO Dick Costolo during the company’s second quarter earnings call last week.

At Deloitte Reagan has been leveraging social business channels to communicate with clients about brand identity and to crowdsource ideas.

The company, which runs an internal Social Media Working Group, has also entertained the idea of providing customer and client service through social media channels.

“By and large, you can’t be isolated in this new world order. Social business and social media and social channels are hugely important,” Reagan said. “They connect us in an increasingly flat world now.”

And while individuals and businesses using social channels to construct particular identities run the risk that recipients won’t decode their messages as they intended them to, the benefits of being social tend to outweigh the risks:

“Being present in social media – that’s the important thing. Social networks are intently designed to be social,” Reagan offered. “You just have to get out there.”

And that’s just what the Deloitte executive is doing: