A rescue worker at the scene of a hurricane searches for victims to aid. The area she needs to cover is enormous and littered with debris, making it difficult to navigate.

Imagine the scene — similar to the one that plastered TV screens and news station walls after the hurricanes of recent memory like Sandy and Katrina — but imagine it, dotted aerially and on the ground with unmanned aerial vehicles (UAV) and unmanned ground vehicles (UGV) respectively. Drones.

The scene sounds at first blush like the plot of a sci-fi novel, but scholars like robotics researcher Chris Vo, a computer science PhD at George Mason University, see the fantasy as an approaching reality.

Vo, who develops drones with four rotors — quadcopters — is the president and director of education for the D.C. Area Drone User Group where he educates people about the technology and social utility of drones.

“My hope is that robots can replace humans for dangerous and tedious tasks so that we can devote our precious time, energy, and brainpower to more interesting and useful pursuits,” Vo told WashingtonExec in a recent interview. “I am interested in autonomous robots that can perform tasks robustly without human intervention.”

When Vo plays out the above rescue scene in his mind’s eye, he sees UAVs one day navigating the space from the air to survey damage and identify areas of interest and UGV rovers, which resolve fine sensory details, navigating the terrain with the assistance of the UAVs broader panorama.

“In the last few years, I have been working on implementing my ideas on real UAVs so I could get a clue about the feasibility of my algorithms in practice,” Vo said, noting that he’s been interested in model rocketry since he was 7 years old.

Vo opened up to WashingtonExec about the future, technology and controversies of drones and his take on how to bolster the dwindling STEM pipeline.

WashingtonExec: What do you do with DC Drone User Group?

Chris Vo: After meeting Timothy Reuter, the founder of the DC Area Drone User Group (DC DUG) and meeting with DC DUG, I agreed to hold some short lectures about “build-your-own” hobby drones, which eventually became a monthly workshop. Many attendees of the workshops share their newfound knowledge, passion, and experience with others by assisting in community service and STEM outreach projects. Today, the DC Area Drone User Group consists of over 1100 members and has expanded to a network of over 5000 members throughout North America, Asia, Asia, and Europe.

As the Director of Education for DC DUG, I continue to hold the monthly drone build workshops. I also provide professional support and custom UAV development through a small startup company, IrixMedia LLC. 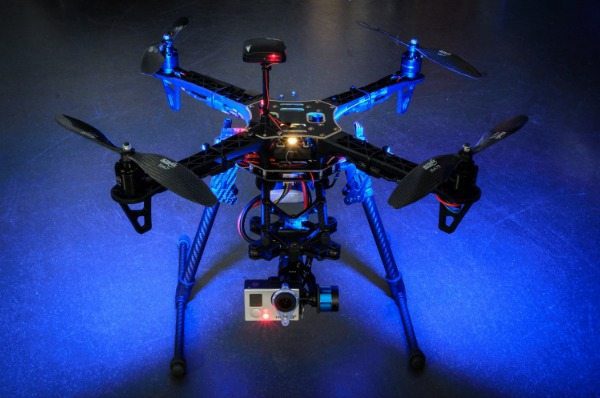 WashingtonExec: What sparked your interest in STEM? How old were you?

Chris Vo: When I was 7 years old, I was fascinated with model rocketry. Some of the neighborhood kids went to the hobby store and bought off-the-shelf models. With my allowance, I could only afford to build my own rockets from scrap materials. However, most of my experimental homemade rockets were total failures. How could I make them fly faster and higher? At the public library, all of the books about rockets were filed under 629. After reading those books and experimenting on my own, I was finally able to build rockets that succeeded every time. Today, my hope is to spread that kind of curiosity to others.

WashingtonExec: What can government and industry do to provoke STEM interest in youth? Do you think there’s a critical age for doing so?

Chris Vo: My own experience learning how to build model rockets when I was 7 was distinct from the experiences of my peers because instead of just consuming technology, I was making it. This hand-to-mind connection, is perhaps what made it so engaging. Therefore, I think government and industry can help by sponsoring programs to incorporate “making” into teaching methods. For example, students can learn algebra and geometry in figuring out the dimensions needed to design and build furniture like shelves and chairs they will use in their own classroom. At one school students learned measurements, averages, and how to calculate area and volume to build emergency shelters for victims of a natural disaster.  These acts of making, tinkering, and problem-solving combined with guidance in math and science are not just educational but can be intrinsically rewarding. 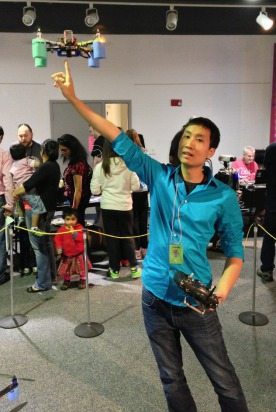 WashingtonExec: How do you see drone use increasing and evolving over the next few years?

Chris Vo: In the long term future where drones are integrated into our everyday lives, they will need to be smaller, safer, and more reliable. To achieve these goals, we will need to develop more efficient batteries, smaller and lighter sensors, and more intelligent algorithms to enable a drone to react to the world around it.

In the short term future, there are already quite a few startup projects looking at how to change the way we interact with drones. Instead of manually operating them with remote control joysticks, consider one day taking a tiny drone out of your pocket and voice commanding it to follow you down the ski slopes, or bringing one to the park with a tennis ball and playing catch with it, or simply pointing to your gutters and tell your drone to clean them.

WashingtonExec: Some have indicated they are dubious about the merits of drones. If you were to respond to critics, what would you say?

Chris Vo: My friends and I love drone technology, but we are human too, so we actually share the concerns of others when it comes to privacy, nuisance, and safety. Therefore, I am optimistic that we will be able to find ways to balance innovation with these concerns.

WashingtonExec: How do the commercial industry (such as Amazon, DJI) and defense industry (GDIT, Northrop Grumman, etc.) compare when it comes to drone technology?

Chris Vo: The defense drone industry is definitely ahead of the commercial and hobby drone industry in most of the core areas related to drones, especially sensors, endurance, and communications. Every branch of the US military has deployed and trained soldiers how to operate small-size (under 50 lbs) drones for reconnaissance, surveillance, and targeting support in overseas operations.  Much of the commercial industry in the USA still awaits FAA approval before conducting domestic operations, but eventually may bring a different set of strengths to drone technology – for example, improving user interfaces, and miniaturization. The gap between hobby, commercial, and defense, drones may converge as the technology becomes cheaper and more ubiquitous.

Chris Vo: This is in part due to the [Federal Aviation Administration]’s assertion that no one may operate a UAV in the national airspace without specific authority, and there are currently no feasible means for a small commercial operator to obtain such authority. As a result, commercial use of drones in the USA will have to wait until the FAA decides on a means to integrate them into the national airspace.

On the other hand, many countries in Europe recognize certifications by EuroUSC, an entity which offers a small aircraft pilot qualification certificate that is recognized by the civil aviation authorities of Belgium, Ireland, The Netherlands, Spain, and the United Kingdom. Getting qualified involves passing an exam that involves a wide variety of topics from aviation safety and navigation to flight planning and the handling of emergencies. A certification system in the USA similar to EuroUSC may be a feasible way to integrate drones safely into the national airspace.